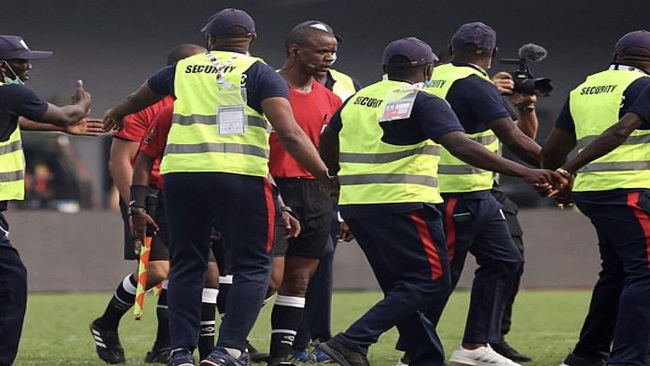 Africa Cup of Nations: Referee blows up 5 minutes early, gets VAR calls wrong, is escorted from the pitch in Limbe 0

The Africa Cup of Nations tournament descended into farce on Wednesday afternoon, thanks to an incredibly inefficient performance from the referee in the Group F match between Tunisia and Mali.

Zambian man-in-the-middle, Janny Sikazwe, had officiated reasonably okay until the match was in its final stages, and then all hell broke loose.

As ESPN journalist, Dale Johnson, noted on his Twitter account, a penalty was given (that was missed) after a VAR review and then Sikazwe blew for full time with only 85 minutes on the clock.

If that weren’t bad enough, play was eventually restarted and the official sent off a player whom VAR then advised shouldn’t have seen a red card.

After rejecting the VAR review for the sending off, he then blew again for full-time on 89 minutes and 40 seconds.

The farcical nature of Sikazwe’s officiating still hadn’t run its course. Video shows the officials after the game, perhaps realising the mistake, deciding what to do and then deciding that the final few minutes did indeed need to be played.

With supporters filing back into the stadium, Tunisia seemingly refused to come out and complete the game, so it was officially ended in their absence.