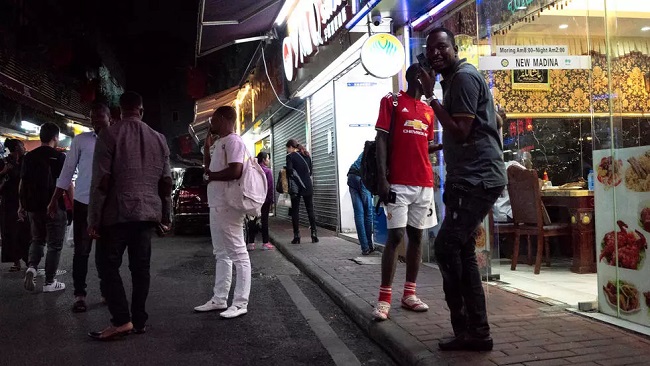 A spike in racial discrimination in China prompted by fears over the Covid-19 pandemic has led some in the African diapora to reevaluate the relationship between the African continent and Beijing.

Over the past week, footage has been published on social media showing Africans in the southern Chinese city of Guangzhou being evicted from their apartments, refused access to hotels or restaurants, and being forced to sleep on the streets. These incidents occurred ostensibly as part of efforts to halt the spread of Covid-19 in the country but have led to a diplomatic crisis between Beijing and African nations.

The images sparked outrage across Africa, with the hashtag #chinamustexplain trending on Twitter and Chinese ambassadors being summoned by irate officials in Nigeria and Ghana, to name but a few. African ambassadors in China wrote to the foreign minister this week over what they called the “stigmatisation and discrimination” being faced by their citizens.

Beijing initially chose to dismiss and deny the accounts of unfair treatment.

“We do not have discrimination in China against African brothers,” foreign ministry spokesman Zhao Lijian said on Monday. He then accused the United States of trying to exploit the issue to undermine China’s relations with Africa. The statement came after a group of African ambassadors in Beijing expressed concern over numerous reports of Africans being forced into quarantine or being singled out for scrutiny by health authorities.

The tone then appeared to soften, as China’s Foreign Minister Wang Yi spoke on the phone with Moussa Faki Mahamat, the chairperson of the African Union Commission, with Wang assuring Mahamat that measures were being taken to improve the situation of Africans in Guanghzou. Mahamat later described the relationship between China and Africa in a tweet as being “strong and brotherly”. It now appears that most of the displaced Africans in Guangzhou have found places to stay and that city authorities are engaging in consultations with the African community as well as academics to repair the relationship.

On Monday, ambassadors and envoys from more than 20 African nations met with China’s assistant minister of foreign affairs, Chen Xiaodong. Chen vowed to lift the health measures aimed at African residents except for those with confirmed cases of Covid-19, AFP reported.

Over the past 20 years, China has become an increasingly influential presence on the continent as Africa’s natural resources have helped fuel the country’s meteoric economic development. According to data from Johns Hopkins University, the Chinese government as well as its banks and companies have lent some $143 billion to Africa between 2000 and 2017, often to finance large infrastructure projects. Recent estimates put the number of Chinese citizens currently residing in Africa at one million while some 200,000 Africans live and work in China.

But for some within the African diaspora, the events of the past week have signaled a change in how they view the China-Africa relationship. Nillah Nyakoa, a Kenyan citizen who has been living in China since 2009 and who works for China Radio International, told FRANCE 24 that the events of the past few weeks might change her view on her host country as imbalances in the relationship come to the fore.

“I’ve called China home for so many years, my narrative has always been about pushing a positive image about China because of my experiences. But when I see my fellow African people being treated as second-class citizens, obviously it makes me want to change my mind.”

“We give good treatment to Chinese people in Africa and it’s not being reciprocated,” she added.

For Samantha Sibanda, the founder of the Appreciate Africa Network, this discrimination has always been present. Her organisation has been trying to counteract the negative perception of Africans in China since 2013 and organises an annual Pride of Africa Asia Award to promote the achievements of her fellow Africans in China.

“People are blowing things out of proportion; this is not new for me,” she said. “This is what we go through every other day.” She cites the difficulty Africans face in obtaining visas or securing equal pay, and said these difficulties will remain even once the pandemic is over.

As for the recent incidents, she said African governments – which have a responsibility to defend the interests of their citizens in China – and media coverage are both to blame.