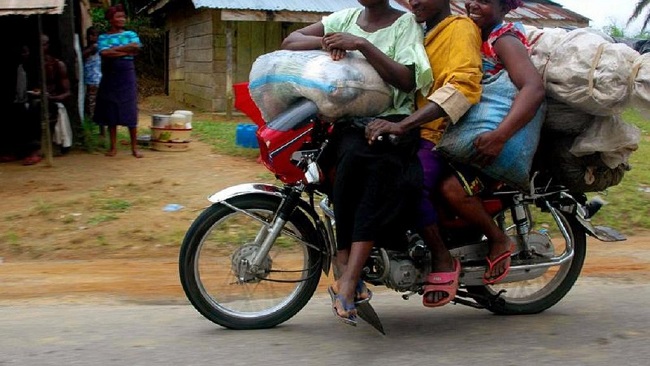 Governor of Cameroon’s North West region has issued an order suspending the total circulation of motorbikes within certain subdivisions of the region.

The regional order dated March 8 was made considering: the exigencies of security, the preservation of peace and maintenance of law and order.

The main sections of the order read: “As from the date of signature of this present order, the circulation of motorbikes is hereby suspended till further notice within the following Subdivisions – Batibo Subdivision and Widikum Subdivision of Momo Division as well as Balikumbat Subdivision of Ngoketunjia Division.

“During the period, motorbikes shall not be allowed to circulate both during the day and at night.” It added that the measure shall not apply to administrative motorbikes, those engaged in security operations by the forces of law and order and those in duly authorized to use them.

It cautioned that persons who violated the rule shall be prosecuted under available laws and subsequently charged relevant authorities with strict implementation of the measure.

The incidence of separatist elements using motorbikes to stage guerilla-style attacks on security forces is believed to be behind the order. But for some people, it is a case of their livelihood being taken away, especially for young people who shuttle people around for a living.

The North West has been under a curfew for the last few months since separatists elements increased the intensity of their attacks of security forces. The neighbouring South West region is under a similar curfew also aimed at containing separatists. 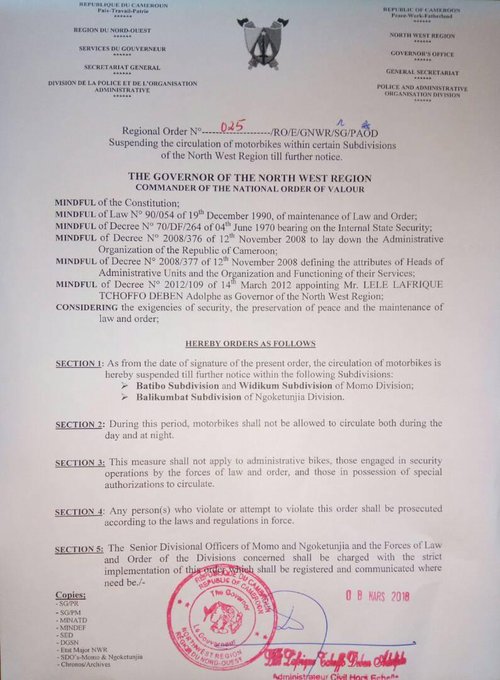 Minority Anglophone population in the country in 2017 started a series of peaceful protests against perceived marginalization by Cameroon’s Francophone-dominated elite. Their actions were almost always met with a government crackdown.

Reported state repression – including ordering thousands of villagers in the Anglophone southwest to leave their homes – has driven support for a once-fringe secessionist movement, stoking a lethal cycle of violence.

The secessionists declared an independent state called Ambazonia Republic on Oct. 1, 2017. Since then, violent scenes that have resulted in loss of lives for both the secessionists and government forces have played out in the Northwest region, whose capital is Bamenda.