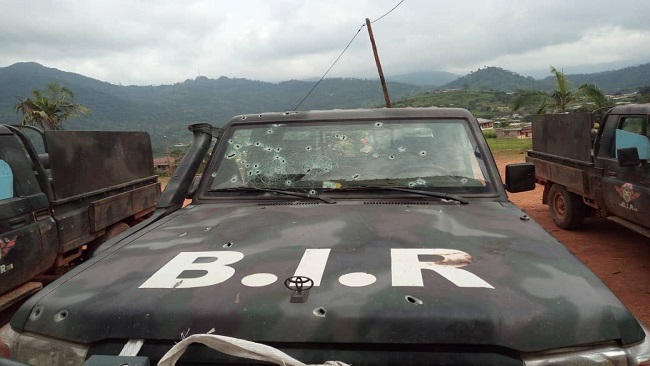 A member of the Ambazonian Interim Government said the convoy had been on its way to the Lebialem County to wage a war of revenge against locals and Southern Cameroons Restoration Fighters when it came under attack. We gathered that a French Cameroun commander was killed in the attack.

A source at the Dschang Divisional Hospital said 28 bodies had been brought in from Beluah. The Ambazonian Interim Government has not claimed responsibility for the ambush. However, we understand the Red Dragons have stepped up their attacks and have been staging assaults in the past weeks on an almost daily basis against French Cameroun security forces.

The Bishop of the Mamfe Diocese, His Lordship Bishop Andrew Nkea has ordered the closure of 12 parishes due to the rising attacks on clergies and the chaotic situation in the territory. President Biya and his administration have come under heavy criticism over their handling of the crisis in Southern Cameroons.

By Soter Tarh Agbaw-Ebai with files from Sama Ernest