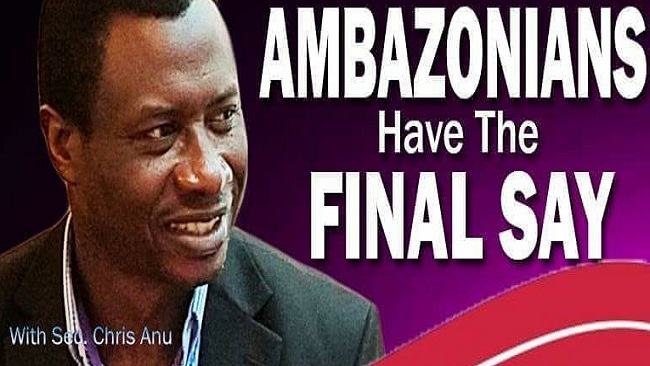 The Interim Government hereby informs the people of the Southern Cameroons/Ambazonia and the general public that with immediate effect, Comrade Chris Anu is no longer Secretary of State for Communications and Information Technology. He, therefore is no longer a member of Cabinet.

Following the announcement of 14th May 2019 reconstituting the pre-5th January 2018 Cabinet and a Call to Service issued by Vice President Dabney Yerima on 22 May 2019, Chris Anu retorted in his public broadcast on ABC TV on 25 May 2019 that he will not work under the leadership of President Sisiku AyukTabe.

In a follow-up letter issued on 26 May 2019, Vice President Dabney Yerima notified Chris Anu that by rejecting the call to duty, he had given up his position as Secretary of State for Communication and Information Technology (SoS DCIT)
Accordingly, Comrade Chis Anu no longer speaks for the Interim Government and the people of Ambazonia.

Henceforth, whatever he says in the name of the revolution whether on his ABC TV, Facebook page or any other media platform should be considered as his personal opinion, which he is legitimately entitled to.
Any attempt to publicly articulate any views as representing the position of the Interim Government would be treated as gross misrepresentation with all the consequences associated thereto.

While we appreciate his service and contribution to our struggle, we also cannot overlook his mounting excesses that have become a liability to the revolution. We trust that he will continue to play a useful role in the revolution in his capacity as a private citizen.

On behalf of the entire Cabinet and the people of Ambazonia, I want to thank Comrade Chris Anu for his contribution to our struggle. We wish him well in all his future endeavours.

Thank You,
God Bless The Federal Republic of Ambazonia