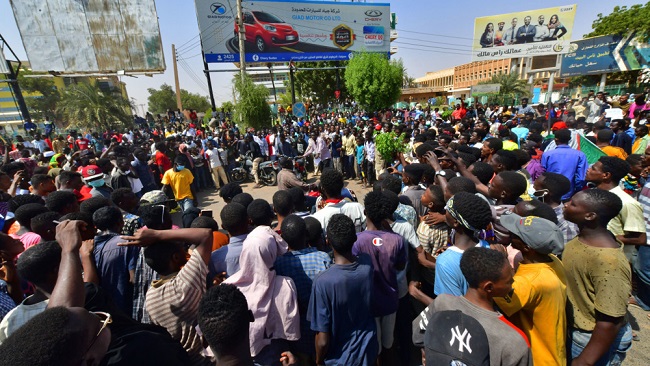 Protesters in Sudan remained in the streets on Tuesday, despite the violence, a day after the country’s military seized power from a transitional government in an apparent coup d’état.

At least seven protesters have been killed and 140 others injured in the countrywide protests that broke out on Monday.

Military forces in the African Union country on Monday detained Prime Minister Abdallah Hamdok after besieging his house. He was taken to an unknown location “after refusing to support coup”.

Hamdok had shared power with the country’s military leadership following the ouster of former president Omar al-Bashir more than two years ago.

Hours after the apparent military coup on Monday, Sudan’s main opposition coalition called for civil disobedience and protests across the country.

The Sudanese Information Ministry said the Forces of Freedom and Change alliance had demanded that the transitional military council step down and transfer power back to the civilian government.

The alliance also called for the release of all detained members of the Sudanese cabinet and the Sovereign Council, the ministry said on its Facebook account.

On Tuesday, more than 24 hours later, protests were gathering momentum across the country, according to reports.

Sudanese security forces keep watch as they protect a military hospital and government offices during protests on October 25, 2021 in the capital’s twin city of Omdurman. (Photo by AFP)

Protesters were chanting slogans like “returning to the past is not an option,” and “civilian rule is the people’s choice,” while some were using tyres to create burning barricades.

The employees of the country’s central bank have also announced a strike to reject the coup, according to the Information Ministry.

The protests have, however been marred by violence. The country’s Health Ministry on Tuesday announced that at least seven people had been killed by gunfire and 140 others were injured.

Authorities said tens of thousands of people opposed to the takeover had taken to the streets and had faced gunfire near the military headquarters in the capital Khartoum.

The Information Ministry said on its Facebook page that the transitional constitution gives only the prime minister the right to declare a state of emergency, calling Hamdok a “legitimate transitional authority”.

The state of emergency was on Monday declared by the coup leader, General Abdel Fattah al-Burhan, who dissolved the cabinet, as well as the ruling sovereign council of military and civilian figures.

The international community has condemned the military takeover, with the UN Security Council expected to hold a closed-door meet on Tuesday to discuss the unfolding crisis.

The United Nations has demanded the prime minister’s “immediate release,” with Secretary-General Antonio Guterres describing their detention as “unlawful.”

“It would be disastrous if Sudan goes backwards after finally bringing an end to decades of repressive dictatorship,” she said.

Meanwhile, the US government has decided to halt the $700 million in economic support for the African country, according to the US Department of State.

General Burhan, however, defended the military actions, saying, “What the country is going through now is a real threat and danger to the dreams of the youth and the hopes of the nation.”

He is slated to hold a news conference later in the day, officials from his office said.