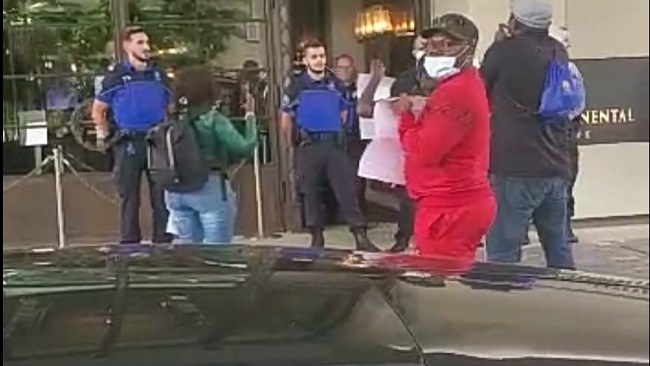 Biya in Geneva: They promised and were as good as their word 0

The Cameroon Diaspora had clearly indicated that it would be wherever Cameroon’s President, Paul Biya, would be hiding in Europe.

The Diaspora is used to interrupting the president’s long and expensive vacations in Europe and it was not going to fail this time around as the ailing and fragile Biya seeks medical asylum in the Swiss city of Geneva.

Members of the Cameroon Diaspora were on hand at the Intercontinental Hotel in Geneva to express their frustration with a president who has been incapable of posting any convincing political and economic results over the last four decades.

Mr. Biya, who was held up at his Unity Palace residence for two years because of the Coronavirus, decided this week to venture out to Europe to seek proper health care, is now dealing with a sticky and humiliating situation as protesters show up at his hotel to remind him of his failure and sorrows.

Mr. Biya left the country last week, leaving behind a nasty civil war that has already claimed more than 10,000 lives and a poorly managed economy that is clearly on the brink of a massive collapse.

For four decades, the Cameroonian dictator has not been able to build a state-of-the-art health facility that can take care of his failing health.

The country’s Diaspora has more protest planned for the week and the objective is to ensure that the unwanted guest gets kicked out of the hotel so that he can return to his country in total disgrace.

More Cameroonians in the Diaspora will be heading to Geneva to shore up efforts by their compatriots to kick out the incompetent and reckless president from a hotel that is costing taxpayers tons of money.

The Cameroon Concord News Group will be providing full coverage of the drama as it plays out in Geneva.