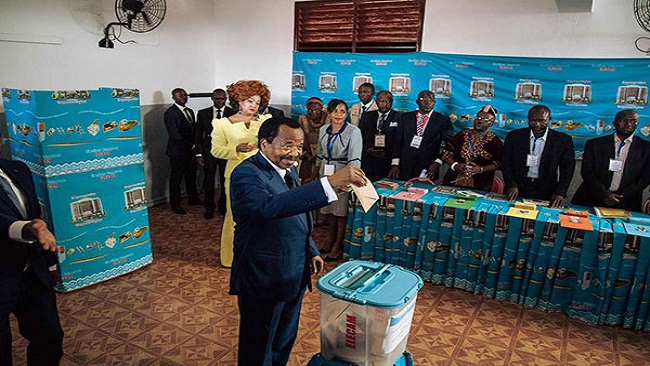 Cameroon has invited bids to build a new house for the president of the Constitutional Council, two days after the council announced the re-election of long-time president, Paul Biya.

Last week, the body dismissed 18 opposition petitions against the running of the elections.

During the hearing, an opposition lawyer accused Judge Clement Atangana of supporting the president.

His wife is an MP for the ruling party but Justice Atangana denied any bias and said all his judgements were based on the law.

While the tender indicates that the building will be a public structure, given the timing, many Cameroonians view this as being specifically for Justice Atangana, reports the BBC’s Ngala Killian Chimtom in Yaoundé.

The BBC has approached both Justice Atangana and the government for comment, but neither have responded.

What happened in the election?

Mr Biya won a seventh term with 71.3% of the vote in the 7 October election.

The election was also marred by violence especially in the two English-speaking provinces which have been hit by more than a year of violent protests and attacks by separatist rebels which have left hundreds dead.

Voter turnout in the country’s two Anglophone regions – North West and South West – was as low as 5%, according to the International Crisis Group.

Official figures recorded an almost 16% turnout in the South-West region.

The formation of the Constitutional Council was enshrined in the 1996 constitution, but its 11 members were only appointed, for a six-year renewable term, by Mr Biya in February.

The team’s first public function was adjudicating the results of the October presidential election.