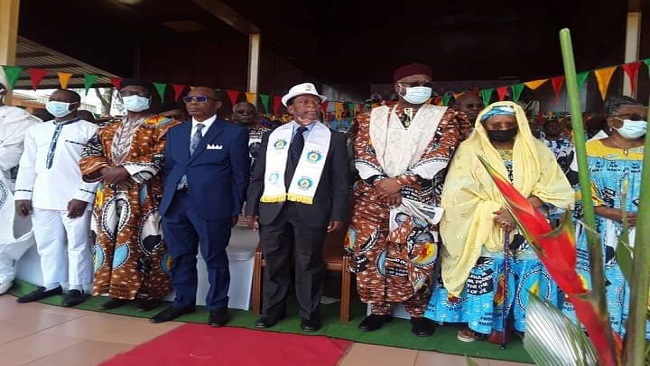 CPDM stalwarts were in Bamenda today to celebrate Biya’s 40 years of incompetence, corruption and arrogance.

Led by the CPDM Secretary-general, Jean Kuete, speakers at the event highlighted what they thought were Mr. Biya’s achievements – indeed his appalling failure – over the last four decades.

But Cameroonians cannot be fooled. The results are there for all to see. The country has been caught up in a downward spiral with corruption becoming the regime’s hallmark.

Since coming to power in 1982, Mr. Biya has legalized corruption. He and his followers hold that nothing can be achieved without corruption. They use money to buy loyalty, corrupt those who criticize the government and imprison those who refuse their bribes.

Cameroon’s jails are full of Mr. Biya’s former collaborators who have embezzled state funds and he and his wife have been involved in many financial scandals which have helped to erode the people’s confidence in the moribund government.

Regarding the economy, Mr. Biya’s government has disappointed millions of Cameroonians. Many had seen him as a savior when he came to power in 1982, but his incompetence has taken the country down the wrong path.

The country’s economy has been in a free fall in decades, spreading pain and death among desperate and hungry Cameroonians.

Millions of Cameroonian youth are without jobs and even those employed are simply eking a living. The country’s civil service is bloated with civil servants finding it hard to make ends meet.

This financial challenge has transformed many civil service workers into   con artists whose main objective of joining the civil service is to line their pockets.

Regarding infrastructure development, Cameroon lags behind most African countries in this regard. For forty years, instead of investing in infrastructure which could drive development and create jobs, Mr. Biya and his collaborators have transformed the country’s treasury into their personal ATM.

The country is bereft of roads, hospitals and educational facilities. Mr. Biya has created many primary and secondary schools, but these institutions only exist on paper as there is no modern infrastructure.

For tertiary institutions, there are many of them in Cameroon today, but the quality of training leaves much to be desired.

The country’s state universities have been transformed into brothels where lecturers with very high libido satisfy their sex needs. Young girls are being dehumanized and robbed of their self-esteem by unscrupulous lecturers just because there are no checks in government-run universities.

Some lecturers even demand bribes from their students, especially those seeking to defend their thesis. This unfortunate situation in the country’s state universities truly reflects what is happening in a nation where young girls are asked to have sex with company heads before they can be given jobs.

Today, even young men are required to sleep with unscrupulous employers for them to get hired. Mr. Biya and his bunch of godless, hell-bound and depraved collaborators have made of Cameroon a fertile ground for homosexuality.

Morals have simply taken French leave of the country and there are no signs that they will return even after Biya and his gangsters leave power.

Today’s meeting in Bamenda, the place where the demon-possessed CPDM was created, is indeed a celebration of evil in human form.

Incompetence, corruption and demonic powers have been firmly rooted in the country under Biya and there is no doubt that the CPDM is very pleased with its leader’s abysmal and appalling failure.

By Rita Akana and Fon Lawrence in Bamenda