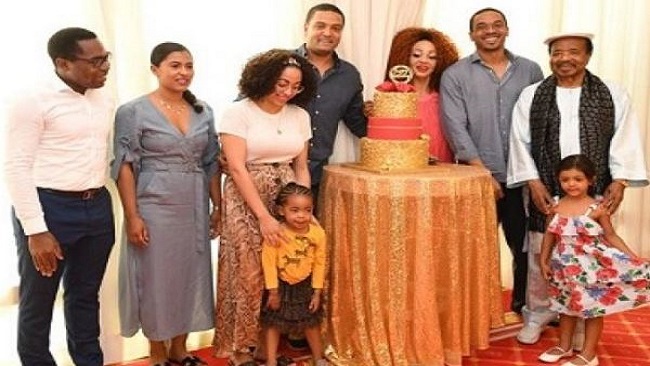 A video posted on social media by Brenda Biya, a chartered member of Cameroon’s wealthy young elite shows that things are really falling apart for the Biya family and that the evil that men do live with them.

To be sure, the video reveals that those among President Biya’s inner circle and family have enjoyed comfortable lifestyles while millions of Cameroonian citizens went hungry.

The 87 year old French Cameroun monarch has refused to resign and his tribal Beti Ewondo entourage is foolishly pushing his children to market via social media passionate celebrations heralding a shameful and disgraceful end to his leadership.

Biya over the years has built up a huge personal fortune in France and in Switzerland from looting Cameroon’s oil, gold and diamond reserves.

Cameroon’s First Lady Chantal Biya has spent millions of US dollars on shopping trips in Europe and the USA on designer labels and her hairstyle is now a legal frame work for Nollywood reference.

Today’s social media outing by Brenda Biya is a frank and thoughtful key to understanding that the Biya’s family is rich and shameless and that the first family have enjoyed immense wealth as Cameroon as a nation battles a struggling economy for more than three decades.

In an interview with Ekinneh Agbaw-Ebai of the Herald newspaper, the late Dr. Siga Asanga described Biya as a very careful civil servant. This explains why it has been extremely difficult to know the worth of the Biya family despite Cameroon being among the poorest countries in the sub Saharan region.

Biya’s family fortune comes from Cameroon’s mineral resources and from the Cameroonian tax payer. His lavish Mvomeka’s palace has more than 50 bedrooms and Biya, his family and his acolytes have homes overseas including in France, Germany, Switzerland and Belgium.

The Biya family is also rumoured to own property in countries in Latin America and Barbados. The Biyas have billion-worth of assets, mostly invested outside Cameroon.

Biya, his first wife the late Jeanne Irene Biya and the current First Lady Chantal Biya have all repeatedly been accused of stealing from Cameroon’s coffers and plundering Cameroons’s immense natural resource wealth for their own benefit.

The Biya family are also said to own several properties in Yaoundé and Douala and his first son Franck Biya has been involved in several dodgy deals in the Cameroon timber sector. However ,it’s Brenda Biya who travelled to the USA to study who have attracted the most criticism for her lavish lifestyles.

In this recent video, Brenda Biya has revealed her hidden privileged lifestyle, even going so far as stating on social media that is it is indeed vanity.