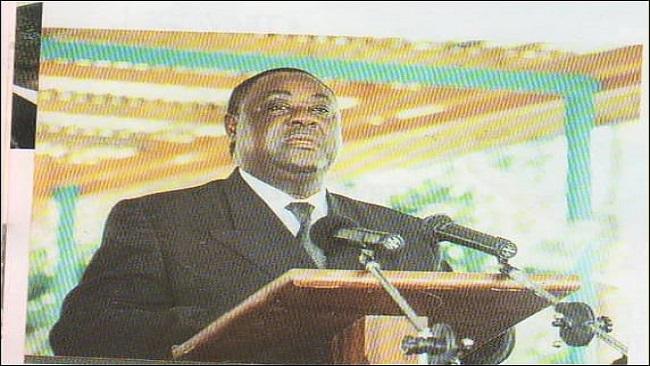 A former minister from the Southwest region John Ebong Ngole who has been sick for years, has finally kicked the bucket in a Yaoundé clinic shortly before a massive bomb exploded in Yaoundé.

The former governor, minister and Board Chairman of the country’s lone oil refinery (SONARA) died later this evening after leaving the Southern Cameroons port city of Limbe in the morning for Yaoundé where he went to seek good medical care.

But as soon as the overweight former SONARA board chairman entered Yaoundé, he was rushed to a clinic where he passed away shortly after.

There is no information about the cause of his death, but the former minister has been in the throes of severe health crises for years, with diabetes, high blood pressure and liver problems converging on him, transforming his body into a conference center.

Meanwhile, as Cameroonians try to digest the news about Ebong Ngolle’s death, a massive bomb went off at Rond point Damas in Yaoundé, injuring several people, with one person fighting for his dear life.

Today’s bomb is the third in less than two weeks. Last week, two bombs went off, but there were no casualties and this has caused the country’s authorities to lose sleep.

The bomb explosions have left the country’s authorities on edge, with many urging the president to deploy more troops in the nation’s capital.

Over the weekend, army soldiers invaded neighbourhoods inhabited by English-speaking Cameroonians in Yaounde where there were serious human rights abuses as a result of the bomb explosions.

Those arrested by the mostly Beti military were made to speak French against their will and those without identification papers were asked to give bribe before being released.

Currently, there is no claim of responsibility for the explosions, but many analysts are pointing a finger at the Brigade Anti-Sardinard (BAS) that has openly threatened to use weapons against the Biya regime which it clearly disrespects and does not recognise.

Sources close to the BAS have informed Cameroon Concord News Group that more bombs will be going off at different locations of the city in the days ahead.

The source, which elected anonymity, said that since elections could not address the country’s socio-political issues, bombs would surely cause the rogue regime to think twice before taking any other actions.

It is rumoured that the crime syndicate ruling the country is working with the French government to have the son of the country’s president, Paul Biya, take over power as the 87-year-old Biya struggles with age and many illnesses which have transformed him into a colony of diseases.

Cameroon has been unstable for many years, especially with the Southern Cameroons crisis that has given the country a very bad name and brought its economy to its knees.

In the northern part of the country, Boko Haram has completely taken over control of things, making it hard for ordinary civilians to live a normal life.

Today’s unfortunate situation is very likely to destabilise Yaounde and destroy the country’s image. Cameroon is a country noted for its natural and human resources and for decades, it has been an oasis of peace in a desert of political and military chaos.

The explosions of bombs will very likely scare off investors and corporations which had thought Cameroon could be a good investment destination.

The days ahead are very bleak for the country and if BAS lives up to its threat, Cameroon will finally be staring down the barrel of failure and it will be considered as a fragile state by development finance institutions.