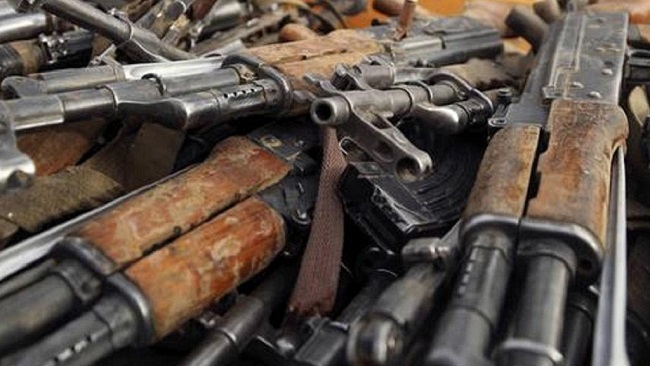 Intelligence services of the Interim Government of the Federal Republic of Ambazonia have confirmed that bullets and guns used by the French Cameroun army in its genocidal campaign in Southern Cameroons that has claimed the lives of some 2000 people had been supplied by France. The Ambazonian security agents briefed Acting President Samuel Ikome Sako late on Sunday the 19th of August 2018 in the US.

Cameroon Intelligence Report gathered that the Ambazonian leader was provided details including the numbers on the weapon confiscated by restoration forces. Acting President Sako is expected to hold his first international press conference today in Washington DC.  The Francophone dominated army has continued its onslaught in Southern Cameroons sparking outrage from international human rights groups and UN officials.

Late last week, Southern Cameroons Restoration Forces hinted our chief intelligence officer in Buea that guns and bullets recovered from the Cameroon government army showed that it was likely manufactured in France. Yaoundé has demonstrated to the international community that its military action in Southern Cameroons is legitimate.

The French government of President Emmanuel Macron has pushed the world to turn a blind eye on the atrocities being committed by French Cameroun soldiers in Southern Cameroons.  Recent comments by the Minister of Territorial Administration, Paul Atanga Nji have highlighted the issue of French complicity in the deaths of thousands of Southern Cameroonians.

Recently, hundreds of Ambazonians in Canada took to the streets to condemn the killings and economic hardship caused by the Biya regime war in Southern Cameroons. The French Cameroun army and its CEMAC allies launched a brutal war against Southern Cameroons last year in an attempt to crush the Anglophone uprising.

The Biya Francophone government military offensive initially consisted of helicopter gun-firing campaign, but was later coupled with the deployment of ground forces. The war, however, has so far failed to achieve its goals, thanks to stiff resistance from Southern Cameroons Restoration Forces.