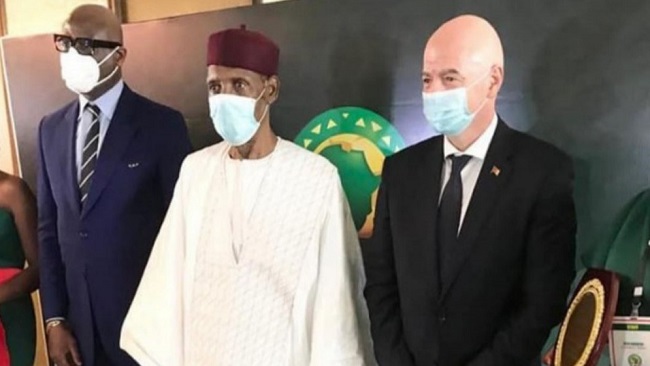 Cameroon Football: How the CPDM Crime Syndicate continues to make it a source of glory and shame 0

In a case of abusive breach of contract, world football governing body FIFA has ordered the Francophone dominated Football federation FECAFOOT to pay 316,000 Euros (207283360 FCFA) to Clarence Seedorf, the former coach of the Indomitable Lions, whose dismissal it considered unfounded.

FIFA stated that the Cameroon Football Federation should pay the applicant within 30 days from the notification of the decision, the said sum of 316,000 Euros as compensation for breach of contract, plus 5% interest from 29 May 2020 until the date of actual payment.

The 45 year-old Clarence Seedorf as well as his deputy Patrick Kluivert, were dismissed from their positions as Cameroon coaches on 16 July 2016, after the Africa Cup of Nations fiasco in Egypt.

The ruling CPDM criminals running Cameroon Football Federation blamed Seedorf and his staff for what they painted as a “premature exit” from the Africa Cup of Nations after the Indomitable Lions were eliminated from the competition by Nigeria.

In August 2019, the Dutch technicians had filed a complaint with FIFA for “unfair dismissal” and were claiming 1.3 billion FCFA from FECAFOOT.

This is not the first time that the consortium of crime syndicates in Yaoundé has been ordered to pay compensation to a technician after an “abusive dismissal”.  The corrupt football men and women in French Cameroun have a well established reputation of separating from those they hire abroad through fraudulent contracts and kickbacks to compensating them afterwards.

FECAFOOT paid the sum of 500,000 Euros to Arie Haan, former coach of the Lions. In 2012, the French coach Denis Lavagne had his contract interrupted by former Minister of Youth and Sports Adoum Garoua and he also received a good fortune.

In November 2015, the German technician Volker Finke obtained 327.5 million FCFA from FECAFOOT after an amicable settlement. His deputy, the Ghanaian Ibrahim Tanko, for his part received 124.450 million CFA francs.

In 2017, Hugo Broos a Belgian coach was paid 94 million FCFA. We of the Cameroon Concord News Group are aware that these French speaking FECAFOOT officials orchestrate all these dismissals in order to get kickbacks.