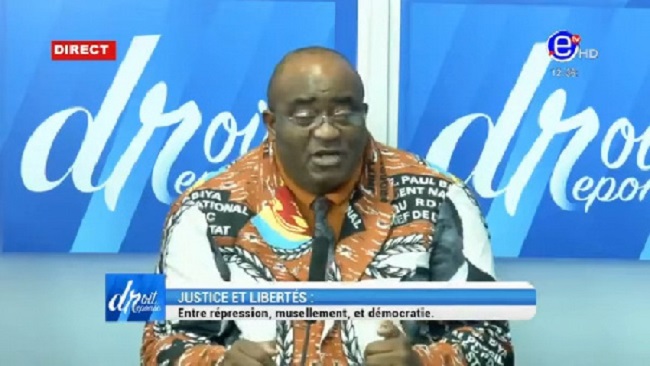 Professor Messanga Nyamding, the former faculty member of the International Relations Institute of Cameroon (IRIC), who was recently transferred to Ngaoundere by the country’s higher education minister, Fame Ndongo, who also doubles as an indefatigable professional dancer, has finally arrived his new duty station.

Messanga Nyamding’s transfer, which is a disciplinary measure for his incisive criticism of his own party, the ruling CPDM, also known as the crime syndicate, is gradually transforming him into a clown and rock star at the same time.

Upon reaching his new duty station, the notorious professor, headed to a local restaurant where he ate a one-kilometer long loaf of bread with an entire pot of meat before heading to the university where he will be imparting knowledge to young Cameroonians.

The minister of higher education, Fame Ndongo, had said on national television that the frustrated professor of international relations would be received in his new obscure university as a hero.

He made this declaration while seeking to prove that Professor Messanga Nyamding’s brutal and sudden transfer was not politically motivated.

Professor Messanga Nyamding had criticized the secretary general at the Presidency of the Republic, Ferdinand Ngoh Ngoh, on national TV, pointing out that the all powerful secretary general was fostering corruption in the civil service by promoting nepotism and mediocrity.

Cameroon has long been known for its legendary corruption and it has, on two occasions, won the world cup for corruption under the watchful eyes of Peter Mafany Musonge who was the country’s prime Minister at the time.

Messanga Nyamding who is cash strapped has accepted his humiliation and has grudgingly moved to Ngaoundere, but he wants to make political out of his misfortune.

Instead of being a beautiful event, the CPDM drama ended up being a COVID-19 super spreader event, with the boisterous and flamboyant Nyamding spraying the deadly virus across the entire city. What was supposed to have been a simple event to escort Professor Nyamding ended up being a super spreader event, with onlookers and participants ignoring all COVID-19 safety protocols and with Messanga Nyamding coughing and blowing his nose irresponsibly.

Professor Messanga Nyamding might not have had the joy and privilege of being escorted to his new duty station because of Prof. Chinje, but he did at least draw attention to himself.

His objective has always been to draw the attention of the country’s president, Paul Biya. He has been looking forward to a good appointment but his dream seems to be turning into a nightmare as his political comrades have resorted to persecuting him as a means of shutting him up for good.

Yesterday’s event in Ngaoundere is by no means the last we will be seeing from the frustrated and flamboyant Nyamding. He needs a political appointment and recognition and he will stop at nothing when it comes to achieving his objective.

Nyamding is hungry. He is cash strapped and while he has taken the humiliation from Professor Fame Ndongo and Mr. Ferdinand Ngoh Ngoh lying down, he has not taken his eye off the ball. Cameroonians will be hearing from him soon as he remains a key member of the CPDM comedy cast.