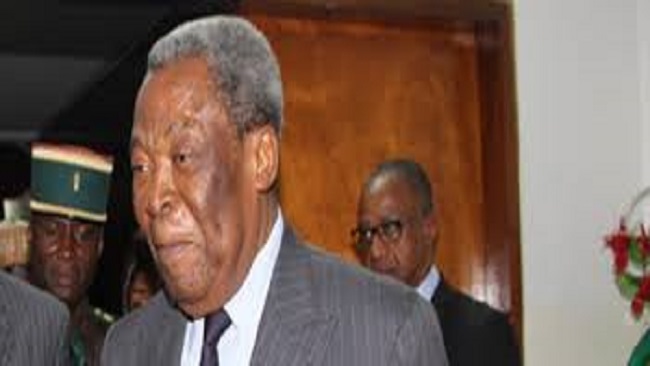 He was once the country’s deputy prime minister and a former managing director of the country’s only power utility corporation, SONEL, in the 1980s. Mr Njifenji has been accused by many of his collaborators in SONEL at the time of embezzling the funds of the state corporation which later faced serious management problems in the 1990s.

Mr. Njifenji who just started his second term as the Senate president has been one of the many reactionary elements who have ensured that no meaningful political change takes place in the country. He has also worked with members of the ruling party to ensure that the Southern Cameroons crisis that has resulted in the deaths of some 4,000 Cameroonians does not get addressed at the negotiating table.

Mr. Njifenji was supposed to lead a delegation to his native region to campaign for outgoing President Paul Biya’s reelection.

Mr. Biya, who is himself suffering from a heart problem and a distended prostate, has not yet been seen on the campaign trail although his surrogates are all over the place trying to convince the population that he will be campaigning soon.

Mr. Biya’s poor economic performance and his inability to steer a prosperous country to safer shores makes it hard for his candidacy to be sold to a population that is hankering for change. Mr. Biya has ruled the country for 36 years and his incompetence has not only left the country with a tough economic situation, it has also caused the country to deal with a civil war that might take decades to address.

The ruling party member said that it was good for some of the old members to start quitting the scene in order to create room for the new generation that could easily deal with some of the economic and political challenges facing the country.

“I have just been advised of the Senate president’s death in a French hospital. I would like to use this opportunity to extend my condolences to his family,” he said.

“With people like Niat out of the picture, our country could start healing. He was one of those reactionary elements of the government who have been blocking efforts to address the Southern Cameroons crisis through peaceful means,” he added.

Mr. Njifenji will be succeeded as Senate president by Chief Tabetando of the Southwest region who has been Mr. Njifenji’s vice for more than four years.

He will surely not be missed by Cameroonians who have been calling for change at the highest level of the country’s political realm. The government is yet to make any official statement regarding his death and our call to his office has not yet been returned.