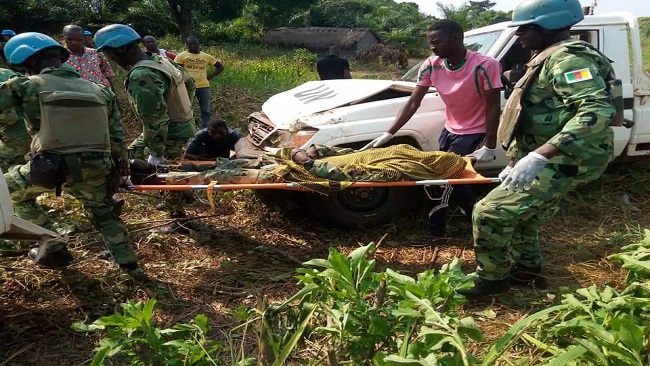 A Cameroonian soldier serving with the MINUSCA mission was killed over the weekend after his car crashed in the Central African Republic, the UN mission to the country (MINUSCA) has confirmed.

There is ongoing engagement within the mission and with mission commanders to ensure that rotations can take place as close as possible to the original planned dates in accordance with the directives of the UN secretary general.

Peacekeepers serve in harsh conditions and at great personal risk. Tragically some make the ultimate sacrifice.

The incident is another example of the risks that Cameroonian peacekeepers face in their engagement in the Central African Republic often at the risk of their lives.

In the country’s northern region, army soldiers are killing young men and women under the guise of fighting Boko Haram insurgents.

In 2018, it took a BBC investigation for the government of Cameroon to admit that its soldiers were killing its own citizens indiscriminately when a video of how a woman and her baby were gunned down point blank by power-drunk soldiers.

Initially, the corrupt Yaounde government claimed that those soldiers were Malian soldiers, adding that the military fatigue and landscape were not Cameroonian.

But superior BBC technology clearly demonstrated that the government of Cameroon was replete with liars, criminals and assasins who would stop at nothing when it comes to sticking around the corridors of power.

But it is in Southern Cameroons that the country’s military has, indeed, demonstrated that it is an army of butchers.

Since 2016 when the country’s English-speaking minority started complaining about marginalization, some 6,000 Southern Cameroonians have been butchered by the thugs who make up the country’s military.

In certain cases, like in Kwakwa, army soldiers have killed old people in their homes as they resorted to a policy of scorch earth designed to intimidate the insurgents.

But their destructive and inhuman actions in many Southern Cameroonian towns and cities have only radicalized many, making it impossible for the military to bring about a fast, conclusive and emphatic victory it thought it would achieve in two weeks.

In Santa and Ngarbuh, the military clearly demonstrated for the international community to see that it had savages in its mist.

In Santa, the country’s territorial administration minister, Paul Atanga Nji, an ex-convict and a con man, engineered the slaughtering of 26 young men, hoping that the truth will not be found and the local population would rise up against the professionally trained Southern Cameroonian fighters.

His Machiavelian scheme fell flat on its face and the world condemned, in no uncertain terms, the brutality of the government.

But it was in Ngarbuh that Atanga Nji’s primitive bestiality was witnessed by the international community when 23 women and children were slaughtered by their own government just to prove a point.

The world reacted swiftly and its condemnation of such primitive behavior was fast. Again, the wretched and inhuman government falsely alleged that the killing of pregnant women and babies in Ngarbuh was the handiwork of Southern Cameroonian fighters.

The truth never hides. Once the pressure of the international community kicked in, the chronically corrupt government once more admitted that its unholy operations in that region were responsible for the deaths of 23 innocent women and children.

It is, indeed, a miracle to see that the wild animals that make up Cameroon’s military are even sent to keep peace in foreign countries.

If their performance abroad is commendable, it is purely because they are guided by international law and the United Nations has a reliable surveillance system that ensures that those serving in its missions conduct themselves in a particular way.

Generally, Cameroonian soldiers cannot be trusted to engineer peace in any part of the world. They are a mirror image of the wicked and violent (mis)leaders who have simply outsourced violence to them. The world needs to keep a special eye on the Cameroon army.