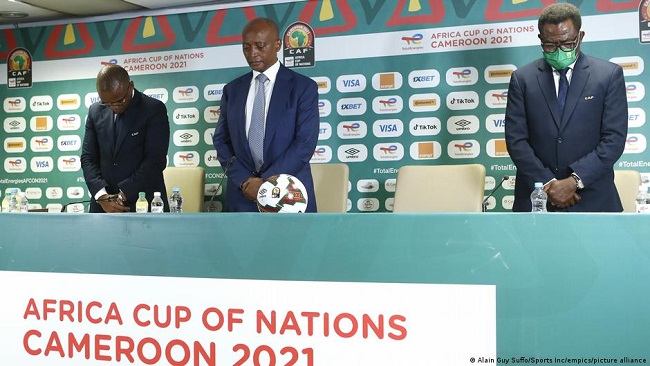 As football fans reel over the deaths of at least eight people outside Olembe Stadium, questions have been raised as to how the tragedy unfolded. There had been concerns about poor preparation ahead of the tournament.

Investigations are underway after at least eight people were killed and dozens more injured in a stampede outside a match at the Africa Cup of Nations (AFCON) football tournament in Cameroon’s capital, Yaounde.

The crush took place as large crowds tried to enter Olembe Stadium, where the host country was playing Comoros in a highly anticipated final-16 knockout game.

The tragedy has realized ongoing fears over the capacity of Cameroon to stage the continent’s largest sporting event.

“The local population is angry because information isn’t coming in on exactly what happened,” correspondent Blaise Eong told DW. “People are also angry that security forces outside the stadium could not contain the fans that were rushing into the stadium.”

Cameroonian President Paul Biya has ordered an investigation “so that all light is shed on this tragic incident,” Communications Minister Rene Emmanuel Sadi said.

Confederation of African Football (CAF) president Patrice Motsepe on Tuesday called for an immediate probe into the crush, with the first report to be submitted on Friday.

“There is no excuse for what has happened. We must show responsibility when people lose their lives and are injured,” he said.

“We will have very tough and very hard discussions behind closed doors,” he added.

“According to police sources on the ground, people tried to force their way into the stadium, and that’s when the stampede happened,” Eong said.

Witnesses on the ground at the time of the stampede said the crowd was surging towards an open entrance gate after a long wait outside the stadium. When stewards closed the gate, people continued trying to push forward.

“That’s where it all began,” she added. “By the time I found myself in front, there were people on the ground being trampled on.”

Another man told AFP that the entrance to the stadium was “complete chaos” as fans without tickets tried to find a way inside.

“I arrived a quarter of an hour before kickoff,” he said. “I had my ticket, but, all of a sudden, a group of people without tickets arrived and tried to force their way through and we found ourselves pushed up against the fences.”

In the aftermath of the crush, people were seen lying motionless on the ground as bystanders tried to resuscitate victims before medical help arrived.

The Public Health Ministry said victims were “immediately transported” away from the scene, but “heavy road traffic slowed down the transport.”

Witnesses also said children were among those caught up in the crush.

“I saw a child less than 10 years old, lifeless,” Asongafack said. “Guys were just trying to revive him.”

Families still searching for loved ones

There were scenes of chaos and confusion outside Messassi hospital after the incident, with at least 38 people hurt in the stampede in addition to those who were killed.

Public Health Minister Manaouda Malachie said 31 of the 38 injured people were responding well. Speaking to reporters, nurse Olinga Prudence said some of the injured “are in a desperate condition.”

People were still gathering outside hospitals in Yaounde on Tuesday morning, searching for missing family members.

“I am helpless: The police have not been of any help and I have not been able to trace my two brothers,” 24-year-old student Festus Ndi said.

The tragedy in Yaounde has shone a spotlight on the preparation issues that plagued Cameroon in the lead-up to the football tournament.

Cameroon is hosting AFCON for the first time in 50 years. It was initially supposed to host the competition in 2019. At the time, it was stripped of its duties owing to serious issues with planning — especially when it came to infrastructure — as well as the ongoing Anglophone Crisis and Boko Haram insurgency.

Organizers were particularly concerned about Olembe Stadium, where the tragedy took place. The country’s largest stadium has a capacity of 60,000, but the crowd is supposed to be limited to 80% capacity in line with coronavirus measures.

In order to gain entry to AFCON matches, fans must show proof of a negative COVID-19 test and be vaccinated, alongside normal security checks at stadiums.

As news of the crush spread on social media, TV stations broadcast footage of people jumping over security fences amid reports that police were quickly overwhelmed.

“Clearly there were deficiencies, failures and weaknesses,” CAF president Motsepe said on Tuesday. “There were problems that should have been foreseen.”

Though no decisions on future measures at AFCON matches have yet been made, Eong said it was possible that stadium capacities would be reduced even further in light of the disaster.

“With this incident, we may find ourselves in a situation where the matches may go ahead without fans, or [organizers] may bring down the number of fans that can go to stadiums,” he said.

The quarterfinal match scheduled to be played at the stadium on Sunday will now be switched to the Ahmadou Ahidjo stadium in Yaounde.