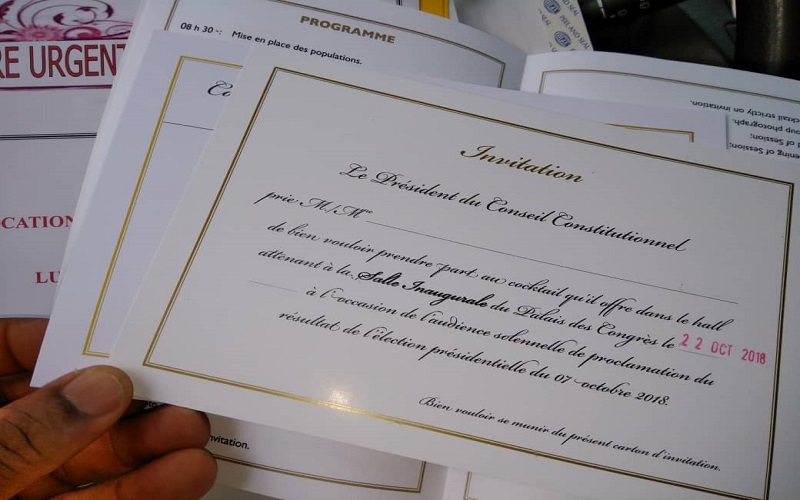 Cameroon’s Presidential Poll: The Constitutional Council was just a formality 0

It is gradually emerging that the hearings at the Constitutional Council were simply part of a scheme designed by the ruling CPDM crime syndicate do deceive the population and the international community.

Even before the hearings wound up, an agenda for the proclamation of results had been designed and guests invited for the event had received their invitations about three days ago.

It should be recalled that all the submissions and pleas of the opposition had been rejected and from there, it was clear that the Constitutional Council was determined to declare Paul Biya the winner of the election, though he had not campaigned and so many irregularities had been pointed out by lawyers and eyewitnesses.

Meanwhile Cameroon Concord News Group has gotten intelligence that the government of Cameroon will soon be dealing with massive post-election demonstrations. The demonstrations are being planned for Monday, October 22 and will last for weeks and months.

“The election results have already been approved by the Constitutional Council and all the drama in the name of hearings is just designed to calm down tempers and deceive the international community” noted a source at the Presidency of the Republic.

The source added that Mr. Biya will be declared a winner on Sunday and there are already plans to deploy troops and police in major cities across the country.  He stressed that a dusk to dawn curfew could be declared in many cities, including Yaounde where it is held that the opposition has a huge following.

As a prelude to what will happen, the government has been deploying troops at strategic locations in Yaounde and Douala, especially in neighborhoods that are mostly inhabited by Bamilekes and Anglophones. This action has been followed by random arrests to frighten any young men who have plans to take to the streets in the coming days.

The beleaguered government has also trained many spies who are serving as its eyes and ears among the population and these agents are spreading word that ordinary citizens should not express their views as they could be arrested.