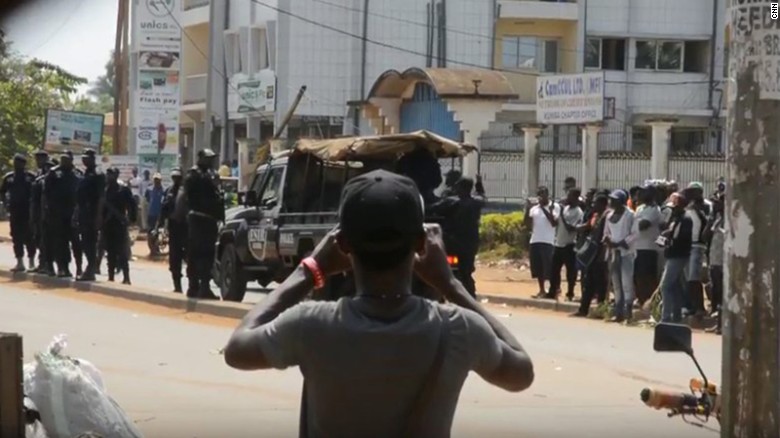 As results of the presidential poll get known based on the reports submitted, the ruling party has set its crackdown machinery in motion, hoping to stop Professor Kamto from leading the country out of its numerous crisis. Change has come to Cameroon and Prof. Kamto is the country’s next president. The results clearly indicate that Cameroonians need change, even those in areas considered as the president’s stronghold.

After having received all the results reports from our agents in the field, Cameroon Concord News Group has provided a detailed result of the poll and the people are prepared to defend their victory. Early today, thousands of Cameroonians descended onto the streets of Yaounde to express their joy and fear that their victory might be stolen like it happened in 1992.

Last night, the country’s territorial administration minister, Paul Atanga, had issued veiled threats to Prof. Kamto and his team, stressing that nobody was above the law. Of course, the law works well when things are against the incumbent. Mr. Atanga Nji still holds that Cameroonians are scared of the military, even when Southern Cameroonians have demystified the country’s military.

Also, the government had dispatched its security operatives to arrest Mr. Kamto, but he had been duly informed by an informant and he promptly left his home. He is expected to hold a press conference later today where he will be claiming his victory and calling on the people to stand up for democracy. He will also urge the international community to be solidly behind democracy so that it can sprout in a country that has known a veiled dictatorship for more than five decades.

Some of his advisers have been arrested and the destructive regime is already coming up with trumped up charges to intimidate them and the population. Unfortunately, this will not work, as the population is prepared to defend that victory. Mr. Biya’s military cannot kill everybody and it is rumored that there are cracks within the military, with a huge segment seeking real change.

After Southern Cameroonians, it is now the turn of the non-Beti Francophone majority that has been standing on the sidelines for a long time. The majority has to do its job. It must liberate itself. The world knows that Mr. Biya has been running a crime syndicate in the name of a political party.

All opposition parties must come together to defend democracy in Cameroon. This is not Kamto’s victory, it is Cameroon’s victory and it must be defended. Cameroonians must take to the streets to ensure Mr. Biya and his people yield to the people’s demand. 36 years are long enough. The Biya regime has spread death and destruction to all the corners of the country. The people are sick and tired of their mismanagement and ineffectiveness.

It should be recalled that Professor Kamto’s victory was never in doubt, but as a measure of precaution, Cameroonians were just going about their business as if nothing positive was not going to happen. Elections in Africa are usually unpredictable and the winner sometimes ends up in jail, as the loser usually uses the military to his advantage. But this will not be happening to Cameroonians. They have been looking for change for decades and it has finally arrived and it will be defended.

The indicators were already there for all to see yesterday. Cameroon Concord News Group’s exit polls had already pointed out that Professor Kamto would be the next president of the country, though many CPDM – the party that has been in power in Cameroon since independence – members were questioning the results of the exit poll.

But after having received all the polling results from our reporters and undercover agents, it is clear that the man who once served under the incumbent, Paul Biya, will be the country’s next president.

The poll was marred by irregularities, many of which were designed to favor the incumbent. However, it must be pointed out that it is hard to organize perfect elections in a developing and infrastructure-poor country like Cameroon.

For example, Prime Minister Yang Philemon was allowed to vote at Up-station in Bamenda while he had registered to vote in Oku which is his hometown since the government could not guarantee security in Oku.

There were reports of polling stations being lodged in unofficial locations. Some ballot boxes also arrived already opened and a lady was caught in the Littoral region trying to stuff the ballot boxes with CPDM ballots.

The incumbent has gone down so easily. He was popularly unpopular even among his fellow Betis. After 36 years in power with no results to show for, it is just normal that the people look for other leaders that can help clean up the mess created by Mr. Biya and his party.

Social media has finally cut down the Biya regime to normal proportions. The lies of the past cannot be cloned in the era of social media. The people have the means to mobilize and Cameroonians are hell-bent on achieving their goal. Mr. Biya will have to kill all Cameroonians to stay in power. 2018 is the year. Enough is enough!