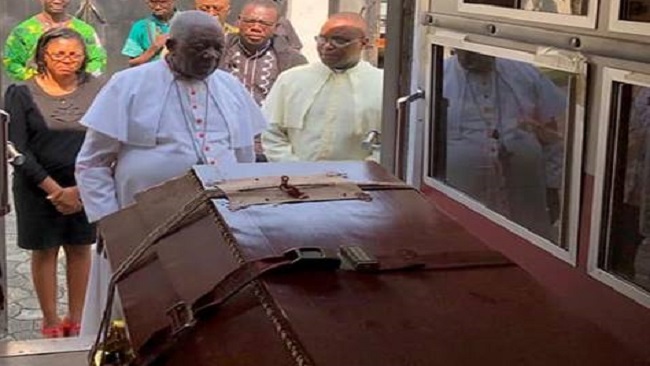 Christian Cardinal Tumi has paid homage to the Kenyan Priest shot and killed by Cameroon government troops in Kembong in the Manyu County. The Cardinal performed the Roman Catholic ritual on the remains of late Father Cosmas Ondari before the corpse was flown to Kenya.

Father Cosmas Omboto Ondari, a Mill Hill missionary, was “brutally and recklessly murdered” at the Kembong church where he was serving as the parochial vicar of the St Martin of Tours Parish, the Bishop of Mamfe, Andrew Nkea, said in a statement.

“He was killed by government soldiers, who were shooting at random from their passing vehicle,” Bishop Nkea said, citing eyewitness accounts. “I visited Kembong Parish on Thursday, November 22 and personally counted 21 bullet holes on the church building… the blood of the murdered priest was still clearly seen on the cemented entrance, just at the door,” the prelate recounted.

Bishop Nkea called for thorough investigations into the heinous crime committed against an innocent and peace loving missionary, adding that the culprits be brought to justice. The Biya Francophone regime claimed Ambazonia Restoration Forces killed the priest on the instructions of a Southern Cameroons activist, Eric Tataw.