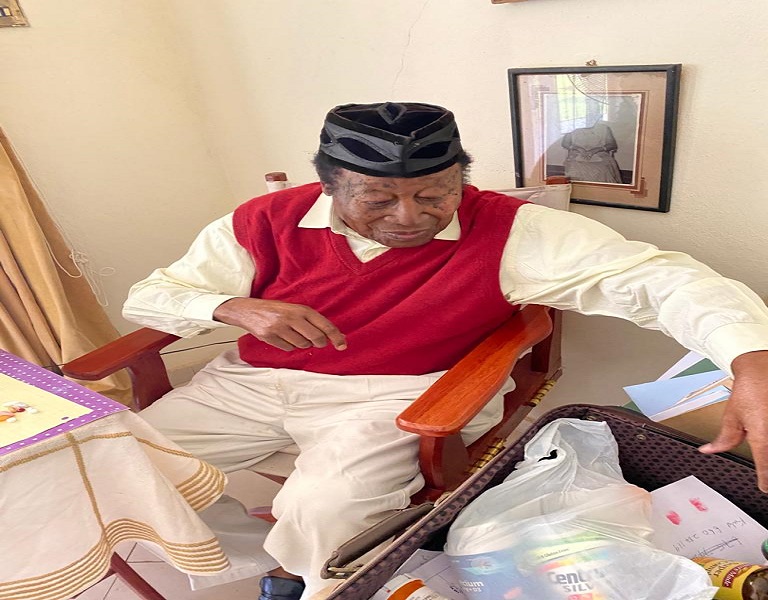 Chief V.E.Mukete of Kumba is dead 0

The great former traditional ruler of the Bafaws has been reported dead – Nfon V.E. Mukete is said to have been battling an unknown illness since last year.  The Bafaw Traditional Council‎ is expected to formally announce the translation of Chief Mukete to his ancestors on Saturday, April 10 in the presence of other traditional Chiefs at the entrance of the palace.

Cameroon Concord News gathered that all the sub chiefs broke down in tears and wailed for the translated former Monarch who died aged 103. We also understand that the Paramount leader of the Bafaws Chief Ekoko Mukete was formally informed of the translation of his father, before it was made known to the sub chiefs and title holders.

Amid all kinds of rumors following the Bafaw paramount leader’s uncharacteristic absence from the opening of the House of Senate in Yaoundé last year, Nfon V.E.Mukete was last seen paying probably his last respect to the Senate President Marcel Niat.

In an interview in the French capital, Paris, Chief Mukete, the oldest member of the so-called Upper House of assembly and a long standing father of the reunification of French and British Southern Cameroons opined that the Biya regime failed woefully in its management of the Anglophone crisis and acknowledged that Southern Cameroonians were being marginalized. Mukete furthered that the creation of the commission for the promotion of bilingualism and multiculturalism was too little too late.

He dismissed the politics of a one and indivisible Cameroon stating that only a ten state federal structure would solve the current Anglophone crisis that has shaken the country for more than four years. However, upon his arrival from the European trip, the Bafaw supreme leader distanced himself from the Paris interview.

Chief Mukete’s influence went beyond the Southern Cameroons minority as he was a member of the Senate, the Economic and Social Council, the Chamber of Commerce and Chairman of the Board of Camtel.