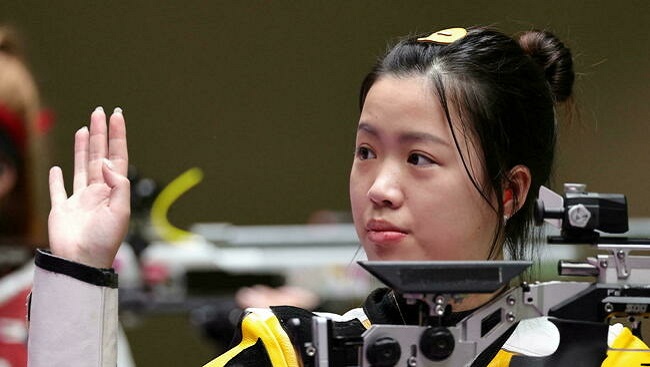 Yang claimed gold with an Olympic record score of 251.8, edging ahead of Russian Anastasiia Galashina on 251.1 and Switzerland’s Nina Christen on 230.6.

Galashina had looked poised to claim gold heading into the last shot, but stumbled with 8.9 on her final effort to allow Yang to seal victory.

The event took place the morning after the Olympics opened in a nearly empty stadium, following an unprecedented postponement and a build-up marred by scandal and controversy.

We have the first Olympic champion of #Tokyo2020!

The first medal ceremony of the Games saw Yang presented with her gold by International Olympic Committee president Thomas Bach.

Yang draped the medal around her neck after being handed the gold on a tray offered by Bach, in keeping with Covid-19 protocols in place at the Games.

With fans barred from venues, only a handful of Chinese support staff were on hand to congratulate Yang after the win.

Christen took bronze ahead of Norway’s Jeanette Hegg Duestad, who led after the qualifying round.