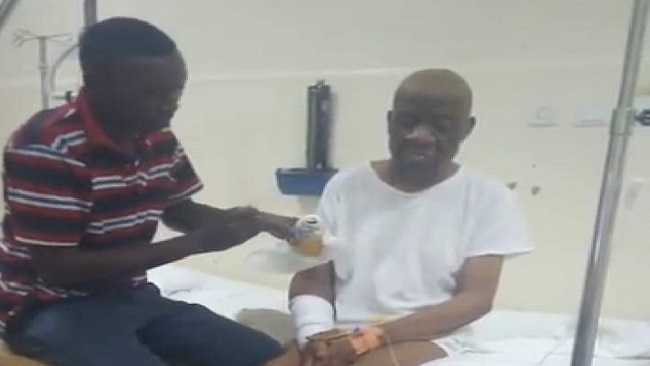 CRTV’s Gervais Mendo Ze dies: If a man appoints you, he can disappoint you 0

Former general manager of the Cameroon Radio and Television (CRTV) died at his residence in Yaoundé on Friday, his family announced.

He is credited with setting the stage for state radio and television to be an important tool of blackmail, misinformation and President Paul Biya’s image laundering used by pro Biya comedians like Paul Atanga Nji.

As a French Cameroun political elite and blood relation to the head of state, Mendo Ze brought to his endeavors an enduring commitment to the Blessed Virgin Mary in a deep wellspring of warmth and good humor and successfully transformed CRTV into a conduit through which fraud is celebrated and the flames of the North West/ South West divide are fanned and Francophones in Mfoundi Division are incited to take up arms against their neighbours.

He made CRTV the voice of hate, sycophancy and intimidation and CRTV under him was used to perpetrate crimes against the people of Southern Cameroons in which alleged “enemies dans la maisons” “biafrais” “anglobami” “Opposants” and now are blackmailed and targeted on account of their ethnicity or valid claims for self determination.

The former General Manager of the Cameroon Radio and Television, CRTV, extremely weakened by stress and illness was told to go home from the notorious Yaoundé Central Prison in Kondengui.

A video of the former pot-belly supporter of the Yaoundé-based crime syndicate was trending on social media, portraying him as a bag of bones that was a victim of a vile system he served and propped whole-heartedly for many years.

The Biya regime was never bad to Mendo Ze when he enjoyed all the fame and perks that came with the high offices he occupied. This regime was like his oxygen and anybody who held contrary views automatically became Mendo Ze’s enemy.

Finally, the man who headed Cameroon Radio and Television for seventeen years was made to have a taste of the medication he helped the ruling crime syndicate to manufacture for Cameroonians.

The fat and bulky Mendo Ze was reduced to a bag of bones and was let off the hook just for him to go and die at home-confirming the Cameroon Concord News assertion that if a man appoints you, he can disappoint you!

The Francophone God of Evil passing for a head of state did not want him to soil the Yaoundé Maximum Security Prison if he dies there. Mendo Ze to President Biya did not even worth the prison’s jumpsuit in which he would have been wrapped if he had died in jail.

Mendo Ze was spared because of his illness, and as we rightly reported he had very limited time to live. He was sent home to die surrounded by his loved ones who saw him melt like snow under very high temperatures.

Mendo Ze was a huge and fat person but he left the Kondengui prison simply a shadow of his former self.

Gervais Mendo Ze former general manager of the Cameroon Radio and Television (Crtv) from 1988 to 2005), was sentenced by the Special Criminal Court to 20 years in prison.

Arrested in November 2014 after he was sacked from the cabinet as Minister Delegate to the Minister of Communication), Gervais Mendo Ze  was prosecuted for several issues which inter alia included fraudulent transport allowances amounting to CFAF 39 million and television tax money.

Justice also reproached him for misappropriation of 360 million FCFA, constituting part of the GM’s running cost of the state owned radio and television.

The Mendo Ze acolytes were all sentenced to 18 years in prison and must also pay CFAF15 billion representing the damage caused to the state and pay a fine of CFAF 962 million.

Depicting the Special Criminal Court established to prosecute alleged corrupt government officials and the several Alibabas responsible for pilfering from the public treasury as the President’s court is no misnomer.  Cameroon Concord News Group calls it President Biya’s court because it is one instrument of power through which the President is reining in on perceived opponents from within his CPDM power conduit.

An attribute of a genuine court is the fairness of the trial proceedings in cases which are brought before the court for trial. It is not the number of convictions entered against accused.  A court is legitimate and recognized as such because of its exercise of judicial, executive, legislative and administrative independence.  A court that is independent must be accessible to all citizens after all, is equality before the law, not a constitutionally protected value? The Special Criminal Court is lacking in these attributes of impartiality, judicial independence and accessibility.  It is perceived more as the President’s Court than a Court of Justice.

Establishing this court was President Biya’s way of saving himself the embarrassment of being humiliated during his perennial trips abroad as the President of the most corrupt countries in the world.  This ranking of the country as the most corrupt or one of the most corrupt countries had a potential to hamper President Biya’s personal pecuniary interests far from the borders of Cameroon.  There was therefore a personal interest need to establish the court.  Another personal interest need was to avail himself of a legal tool under his direct control to consolidate absolute power, blackmail potential rebels and competitors within the system and to stifle any form of institutional opposition. He perceived the court as a tool with which to whitewash his more than thirty years of corrupt governance and the rape of the economy.

In one instance, he ordered a detained late Minister Bapes Bapes released from remand custody at Kondengui when a warrant was issued for his arrest without the presidential fiat.  Prof Titus Edzoa a former Secretary-General at the Presidency of the Republic benefitted from a purported Presidential pardon whose primary purpose was the release of a French citizen Thiery Atangana from jail.

The fear of a presidential referral to the Special Criminal Court on additional charges of corruption under a practice devolved under the supervision of Paul Biya called “rouleur compresseur” pushed Titus Edzoa   to rejoin the CPDM Party without a public resignation or repudiation of his membership of the party on which he intended to contest presidential elections prior to his incarceration.  Edzoa was a victim of this system of presidential justice when new charges were brought against him when his first imprisonment was about to end in order to maintain him in prison.