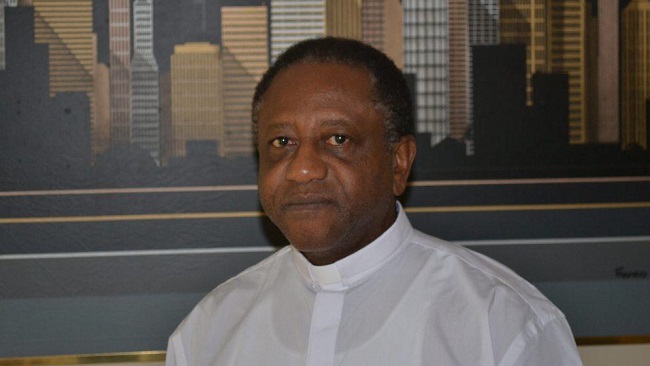 Death is announced of the Vicar for Clergy Bamenda Archdiocese 0

The death has occurred, after a brief illness, of the Vicar for clergy in the Bamenda Archdiocese, Rev Fr. Patrick Nyuydini Lafon, who also moonlighted as lecturer at the Catholic University of Bamenda.

Archbishop Andrew Nkea expressed his sympathy to the family and friends of the Vicar and said priests of the metropolitan Archdiocese were saddened by the news of his passing as he held, over many years, several roles of leadership and responsibility in the Archdiocese of Bamenda and nationally.

Fr. Patrick Lafon was ordained a priest 43 yrs ago and was among the last outstanding academic batch of Cameroonian priests trained in Bigard seminary that celebrated their forty years in priesthood in 2017.

He spent 15 years in the nation’s capital and facilitated the growth and solid establishment of the English speaking Catholic Communities in Yaoundé from Etougebe to Nsimeyong.

He mastered the modus operandi of the Cameroon Catholic Church hierarchy, and gained a reputation for speaking truth to power, in very difficult times such as the tragic death of Fr Patrick Adeso at the Catholic University, unexplained till date.

At the end of his tenure in French Cameroun, Fr. Lafon pursued a doctoral studies at the Catholic University of America, CUA (Washington DC) in Metaphysics under the direct supervision of renowned John Wippel, a leading scholar on Thomistic Metaphysics, and wrote a thesis on “Virtue in Politics” according to Yves Simon.

Upon return he was made principal of St Paul’s College, Nkwen, and lecturer in Metaphysics & Epistemology at  STAMS Bambui. When the Catholic University in Bamenda opened the Department of Philosophy, he became a part of the CATUC family and rose to the rank of Dean of Faculty replacing Prof Paul Nkwi.

Fr. Lafon’s last public appearance was his coordination of the encounter between the Vatican Secretary of State Cardinal Pietro Palorin with the clergy of the Archdiocese of Bamenda. He was frank, candid and he provided a thoughtful key to understanding the Southern Cameroons Crisis.

He will be greatly missed by his students at St John Paul II Major Seminary, Bachuo Ntai in Manyu Division, where he lectured Metaphysics & Epistemology and also those of CATUC, where he recently launched the Doctoral Program in Philosophy.