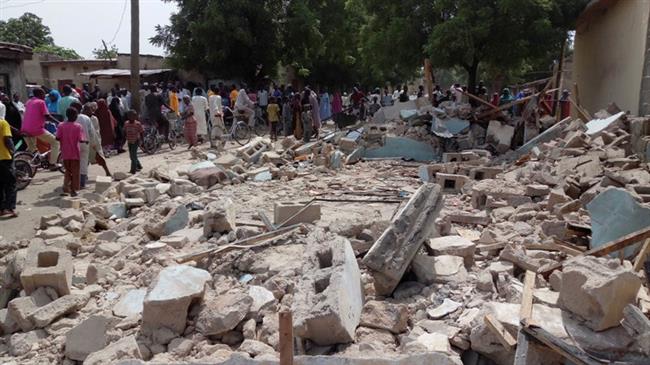 At least five people have been killed and six others injured after Boko Haram Takfiri terrorists launched an attack on a village in Nigeria’s northeast.

Residents said Saturday that a bomber, suspected to be a member of the Takfiri terrorist outfit, detonated his explosives among a group of residents sleeping in the open in Tungushe village, which lies six kilometers (nearly four miles) north of the provincial capital of Maiduguri, at about 12:15 a.m. (2315 GMT) on Friday.

Mustapha Muhammad, a civilian militia leader in the area, said the blast was followed by gunfire from Boko Haram militants lurking in the dark.

The Nigerian government has insisted on several occasions that Boko Haram has technically been rooted out from its bastions in northern Nigeria. However, attacks have continued unabated in crowded places, mostly by female recruits. The attacks have targeted mosques, markets and camps housing displaced people.

On Wednesday, 15 people, including military personnel, were injured when two bombers targeted a market on the edge of a military base in Maiduguri.

On June 16, six young girls killed 43 people in bomb attacks in the town of Damboa.

Since 2009, acts of terror by Boko Haram have left at least 20,000 dead and made over 2.6 million others homeless. The group pledged allegiance to the Daesh Takfiri terrorist group in 2015.