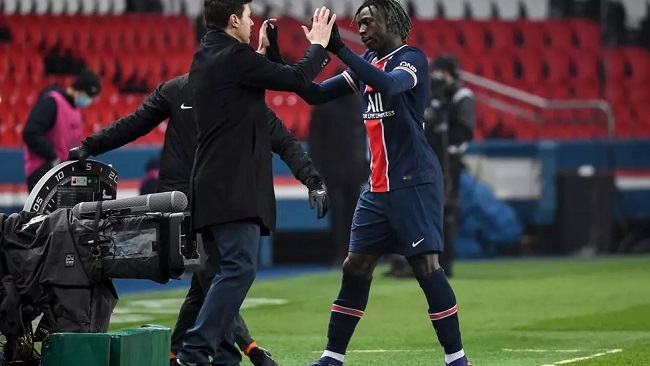 Football: Pochettino gets first win with PSG but Lyon stay top of Ligue 1 0

Mauricio Pochettino celebrated his first victory as Paris Saint-Germain coach on his home debut on Saturday as Moise Kean set the reigning champions on their way to a 3-0 win over Brest, but Lyon remain top of Ligue 1 after drawing at Rennes.

Substitutes Mauro Icardi and Pablo Sarabia added late goals for PSG who would have gone top on goal difference had Lyon not recovered from 2-0 down to earn a point in Rennes and extend their unbeaten run to 16 games.

PSG are second at the season’s halfway stage, a point behind the leaders and ahead on goal difference of third-placed Lille, who triumphed 1-0 at Nimes.

With Neymar still missing, it was not a vintage performance from PSG on a freezing Parisian night in an empty stadium — supporters are still barred from games in France with a nighttime curfew in place nationwide as part of the fight against coronavirus.

That meant it was never going to be the return to the Parc des Princes that Pochettino — who was a popular player for PSG two decades ago — would have liked.

Nevertheless the Argentine will be relieved to have his first win in charge after his first game ended in a 1-1 draw at Saint-Etienne in midweek.

He could now get his first piece of silverware when PSG play Marseille on Wednesday in the Champions Trophy, the French equivalent of a Super Cup that in normal times is the curtain-raiser to the season.

It remains to be seen if Neymar, after four weeks on the sidelines, will be fit for that game, while defender Thilo Kehrer will be sidelined after news of his positive coronavirus test fell shortly before kick-off against Brest.

Pochettino again started playmaker Marco Verratti in an advanced role behind central striker Kean, with the latter opening the scoring in the 16th minute.

Captain Marquinhos headed Angel di Maria’s corner against the post and Kean was on hand to nod in the rebound from barely a metre out. It was his 11th goal, and his ninth in Ligue 1, since signing on loan from Everton in October.

Brest, who sit in mid-table and are one of the best sides to watch in France, could have scored before that but Keylor Navas clawed away Romain Faivre’s early effort for the visitors.

It was only in the final 10 minutes that PSG ran away with the game, as Kylian Mbappe set up Icardi — on in place of Kean — to get the second before Sarabia fired in to make it 3-0.

Lyon’s long unbeaten streak looked set to end as they found themselves two goals down in Rennes, with Clement Grenier and Benjamin Bourigeaud scoring for the home side.

However, Memphis Depay pulled one back with his 11th goal of the season on 79 minutes and Jason Denayer equalised shortly after.

Lille bounced back from a shock midweek home defeat by Angers to win at Nimes thanks to a first-half goal by veteran Turkish striker Burak Yilmaz.

The draw for Rennes, and a goalless draw for Marseille at Dijon, allowed Monaco to move up to fourth spot as they beat Angers 3-0 with German international Kevin Volland grabbing his ninth Ligue 1 goal in between efforts from Guillermo Maripan and Stevan Jovetic.

There were also wins for Bordeaux, Reims and Strasbourg.