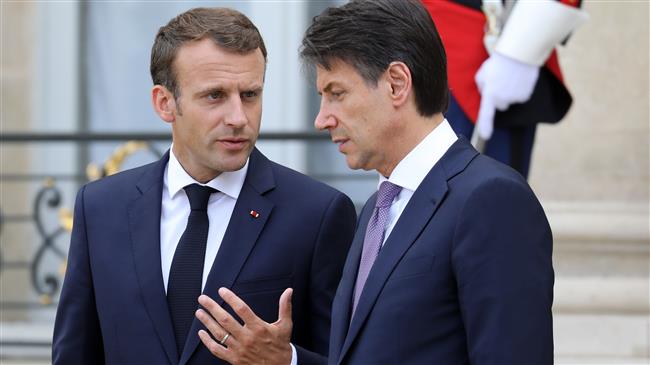 French President Emmanuel Macron has criticized Europe’s handling of the influx of refugees to the continent, calling for a collective European response to the worsening crisis.

Speaking at a joint press conference with Italy’s new Prime Minister Giuseppe Conte at the Elysee Palace in Paris on Friday, Macron said “the proper response is European, but the existing European response is not adapted” to the times.

Macron criticized Europe over its failure to fulfill its role with regard to Italy as the first European country on the migration route from North Africa.

The French president called for greater protection of European borders, noting that “the existing system does not work.”

Europe’s refugee crisis escalated earlier this week after Italy and Malta turned away Aquarius rescue ship carrying 629 refugees and kept it waiting in international waters between the two countries for over 30 hours with limited food and drink supplies and in bad weather conditions, facing potential death.

Spain eventually offered to take in the ship amid safety fears due to deteriorating weather conditions and offered its port in Valencia as a place for the asylum seekers to land in Europe.

Macron later rebuked Italy for “irresponsibility” over the matter. Italy’s new populist administration censured what it referred to as “hypocritical lessons” from countries such as France on refugees, publicly displaying one of the most serious disagreements between two EU member states.

After their meeting on Friday, Macron and Conte seemed to have settled their diplomatic row, with the Italian premier saying, “We are in perfect agreement.”

Macron urged the Italian premier to work with France, Germany and Spain on resolving refugee issues instead of siding with an anti-immigration “axis” recently proposed by Austria’s right-wing Chancellor Sebastian Kurz.

“I hope deeply that France and Italy will work hand-in-hand, together, to propose and contribute European solutions, in particular with partners like Spain and Germany,” Macron said.

The French president warned that such an axis was a reminder of Europe’s darkest times — when Germany and its allies were called the Axis powers during World War II– and noted that only a head of state can speak on behalf of a country.

Germany’s interior minister had said earlier this week that his country should form the anti-immigration “axis” with Austria and Italy. However, German Chancellor Angela Merkel warned EU countries on Wednesday against pursuing a unilateral policy with regard to the refugee crisis and called on the bloc’s member states to overcome their differences and take a unified approach over the issue.

The Italian premier appeared to dismiss joining forces with the anti-immigration “axis” and said that he “agreed with the words of my friend Macron” with regard to the need for an EU-wide approach to reforming immigration rules.

“I would like an axis of the willing that includes all the European countries,” he said.

Conte underlined the need for the formation of European-run immigration offices outside the continent for assessing asylum requests in an attempt to prevent “voyages of death.”

Over the past five years, more than 600,000 refugees have reached Italy by risking their lives on rickety human smuggler boats in the sea. Some 500,000 of them are still staying in the country.

According to the UN migration agency (IOM), over 3,000 refugees lost their lives died crossing the Mediterranean in 2017.

The majority of refugees from Africa take the sea route from Libya to Italy to reach Europe, while some others depart from Morocco to Spain.