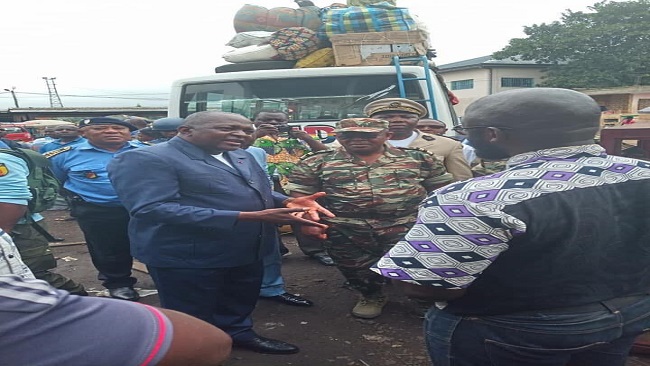 The Francophone governor of the so-called South West region, Okala Bilai whose military has killed, maimed, tortured, and detained thousands of Southern Cameroonians, has sought to downplay the atrocities, which the Ambazonian Acting President Dr. Samuel Ikome Sako and the International Crisis Group have conclusively said constitute genocide.

In a surprise visit today at Mile 17 Buea, Governor Okala Bilai said, “There are of course ways in which, the Cameroon government could’ve handled better the Anglophone problem.”  The governor who addressed Southern Cameroonians recently as “dogs” was quick to sound even softer about the nasty activities of the Francophone dominated army.

The Francophone governor pleaded with Ambazonians not to flee Buea the capital city of the Southern Zone to Douala and Yaounde in French Cameroun. More than three thousands Southern Cameroonians have been killed by troops loyal to the Biya Francophone regime in Yaoundé and scores injured, arbitrarily arrested, or raped by the French Cameroun army and Minister Paul Atanga Nji militia.

The plight of Southern Cameroons long suffering in Francophone-majority La Republique du Cameroun, has attracted international attention only recently. Southern Cameroonians — who have lived in a vicious political setting with French Cameroun for generations are branded “enemies dans la maisons” “biafrais” “anglobami” “Opposants” and now are blackmailed and targeted on account of their ethnicity or valid claims for self determination.

By Soter Tarh Agbaw-Ebai in Buea