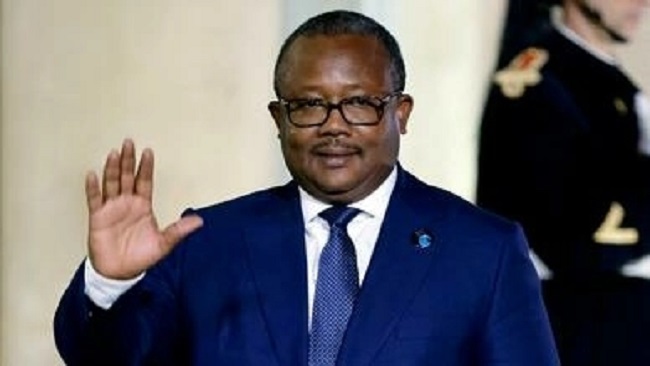 President Umaro Sissoco Embalo of Guinea-Bissau on Tuesday said he survived heavy fire for five hours during an attempted coup which he claimed killed or injured many people in the unstable west African country.

Appearing in a video posted on the presidency’s Facebook page hours after gunfire was heard near a compound where he was chairing a Cabinet meeting, Embalo said some of the people involved had been arrested.

“The attackers could have spoken to me before these bloody events that have seriously injured many and claimed lives,” he said, without clearly indicating who was behind the unrest.

But Embalo said the failed coup was linked to decisions he had taken “notably to fight drug trafficking and corruption”.

Shortly before the video appearance, the president told AFP in a brief telephone call: “All is well” and added that the situation is “under control”.

Earlier on Tuesday, sustained gunfire was heard near the seat of government in the coup-prone West African state in what the African Union and a regional bloc called an “attempted coup”.

Heavily-armed men had surrounded the Palace of Government, where Embalo and Prime Minister Nuno Gomes Nabiam were believed to have been attending a cabinet meeting.

People were seen fleeing the area on the edge of the capital Bissau, near the airport.

Local markets were closed and banks shut their doors, while military vehicles laden with troops drove through the streets.

According to various accounts, in the early afternoon armed men were seen entering the government palace, which houses different ministries.

Some witnesses described the gunmen as military, others as civilians.

Gunfire could be heard for a large part of the afternoon when the complex was surrounded.

An AFP reporter was warned to leave the area by a man carrying a gun who pointed it at him.

The former Portuguese colony, just south of Senegal, is an impoverished coastal state of about two million people.

It has seen four military coups since gaining independence in1974, most recently in 2012.

In 2014, the country vowed to return to constitutional government, but it has enjoyed little stability since then, and the armed forces wield substantial clout.

A 36-year-old Frenchwoman living in Bissau, Kadeejah Diop, said she rushed to pick up her two children from school and witnessed armed troops entering the government complex.

“They made all the female workers leave. There was huge panic,” she told AFP by phone from her home. “Right now, we are holed up indoors. We have no news.”

Troops set up a security perimeter around the palace and kept people away.

A journalist, asking not to be named, reported that at the start of the afternoon the public television centre had been occupied by soldiers who refused to let staff leave. It was not clear if they were part of the coup bid or government loyalists.

An AU statement said he was following “with deep concern the situation in Guinea Bissau, marked by the attempted coup d’etat against the government”.

The Economic Community of West African States (ECOWAS) also issued a statement saying it “condemns this attempted coup” and urged soldiers to “return to their barracks”.

The bloc warned that it “holds the military responsible for the well-being” of the president and government members.

The United Nations said Secretary General Antonio Guterres was “deeply concerned with the news of heavy fighting in Bissau”.

He called for “an immediate end to the fighting and for full respect of the country’s democratic institutions,” the UN’s statement said.

He was a candidate for a party called Madem, composed of rebels from the African Party for the Independence of Guinea and Cape Verde (PAIGC), which had led Guinea-Bissau to independence.

His chief opponent, PAIGC candidate Domingos Simoes Pereira, bitterly contested the result but Embalo declared himself president without waiting for the outcome of his petition to the Supreme Court.

Late last year, the armed forces chief said members of the military had been preparing to launch a coup while the president was on a working trip to Brazil.

Troops had been offering bribes to other soldiers “in order to subvert the established constitutional order”, armed forces head General Biague Na Ntam said on October 14.

The government spokesman denied his account the following day.

In addition to volatility, Guinea-Bissau struggles with a reputation for corruption and drug smuggling.

Its porous coastline and cultural ties have made it an important stop on the Africa trafficking route. In 2019, nearly two tonnes of cocaine were seized.

The region’s mounting instability is scheduled to be discussed on Thursday at an ECOWAS summit in Accra, Ghana.

“It looks increasingly hard to argue against the idea of coup contagion,” Eric Humphrey-Smith, an analyst at risk consultancy Verisk Maplecroft, told Reuters.

“When added to successful coups in Mali, Burkina Faso, Guinea and Chad in the past year, there is no doubt that West African leaders are nervously looking over their shoulders.”