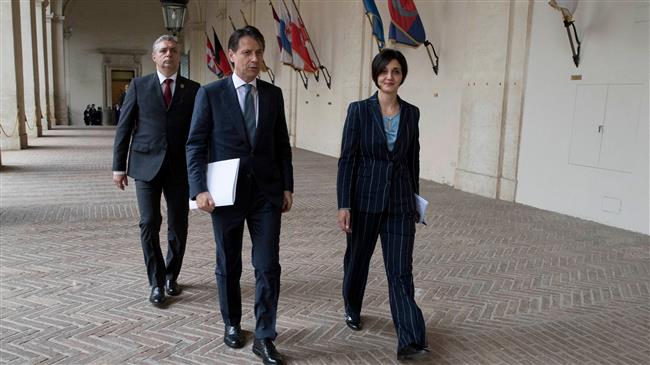 Italy has plunged into political uncertainty after the president refused to endorse the eurosceptic pick for the post of finance minister, prompting the premier-designate to drop the mandate to form a government and pushing the country to the verge of fresh elections.

President Sergio Mattarella refused on Sunday to accept the nomination for finance minister of Paolo Savona, who had formerly said that the country’s entry into the European Union’s single currency, euro, was a “historic mistake.”

This prompted prime minister-designate Giuseppe Conte to give up his mandate to form a government, said an official from the presidential palace following talks between Mattarella and Conte.

“The uncertainty over our position has alarmed investors and savers both in Italy and abroad,” the president said in a televised speech. “Membership of the euro is a fundamental choice. If we want to discuss it, then we should do so in a serious fashion.”

Under the country’s law, the president is authorized to reject the appointment of a cabinet member.

​Mattarella said he will appoint a technocratic, or non-political, prime minister. His office later said the president has invited Carlo Cottarelli, a former senior director at the International Monetary Fund (IMF), for talks on Monday.

Cottarelli, 64, is widely known at home as “Mr. Scissors” for making cuts to public spending. To become prime minister, he is required to gain the approval of parliament with Five Star and the League holding a majority in both houses.

Italy – a founding member of the European Union — has been without a government since elections on 4 March and is now expected to go to the polls again later this year.

Two populist parties— far-right League and anti-establishment 5-Star Movement – which were trying for form a coalition government, responded with fury to the president’s veto of their choice and accused him of abusing his constitutional powers.

Some lawmakers within the coalition have even called on the parliament to impeach Mattarella.

“In a democracy, if we are still in democracy, there’s only one thing to do, let the Italians have their say,” Salvini said.

He also wrote in a Facebook post that “it won’t be an election, it will be a referendum between Italy and those on the outside who want us to be a servile, enslaved nation on our knees.”

Under article 90 of the Constitution, the parliament can demand that the president step down based on a simple majority vote.

If that majority is secured, the constitutional court should then make the final decision on whether to impeach the president.

If it manages to form a government, the coalition would be the first eurosceptic alliance to head a founding member state in EU history.

Five Star Movement and the League have vowed to battle the European Union over its financial and immigration policies. The two have formerly been open to the possibility of Italy holding a referendum on euro.

According to recent polls, the League, which won 17 percent of the vote in March, would surge in any early ballot, while support for 5-Star remained strong on around 35 percent.

Center-left and center-right parties, however, are said to be losing further ground in the face of high unemployment, the sluggish economy and rising poverty.

“Today, we need people to say ‘no’ to those who want to break us apart, who make excuses rather than assuming their responsibilities, who are playing on the anxieties of others,” Renzi wrote on Facebook.

The prospect of a eurosceptic government in Rome has concerned European Union leaders such as French President Emmanuel Macron and German Chancellor Angela Merkel, who are pushing for further political and economic integration.