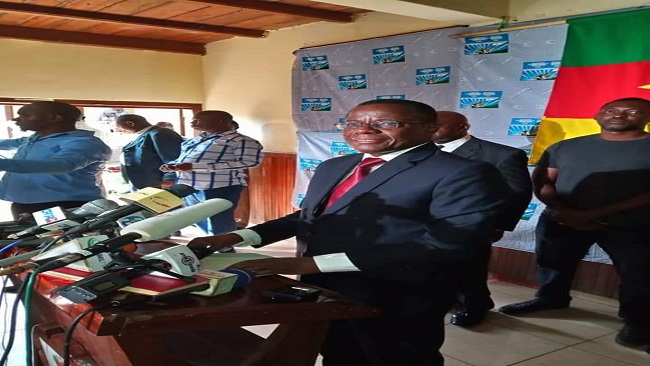 According to a leaked Cameroon government document, CPDM barons are planning to strictly control the activities of Prof Maurice Kamto, the man widely believed to have won the October 7 presidential elections including members of his coalition.  The ruling Beti-Ewondo elites are also aiming to further militarise the nation’s capital before the official proclamation of the results.

Meanwhile, leading members of the Francophone dominated Cameroon opposition and civil society groups this week hinted Cameroon Concord News Group about widespread surveillance and intimidation tactics being used against Southern Cameroonians and people from the Western region which is the political base of the President-Elect, Maurice Kamto.

The internal memo, written by the Delegate-General for National Security, Martin Mbarga Nguele was leaked late this evening to our chief intelligence officer in Yaoundé and outlined plans for more than 300 officers to provide what the Biya regime intends to paint as a “protective custody” on Maurice Kamto, leader of the MRC party.

Prof Kamto was recently prevented from holding a press conference and many members of his campaign have been arrested on widely discredited claims that he declared himself winner of the October 7 presidential election.

While mainly detailing measures and tricks and action planned by the Biya regime to link the Kamto Campaign to terrorism, crime and social chaos, the document also mentions broader plans to crush the Southern Cameroons resistance.

The Francophone authorities are to strictly control activities of Bamilekes and Anglophone civil society organizations, Anglophone and Bamileke unions, Nigerians, former Anglophone military officers and the members of the Interim Government of the Federal Republic of Ambazonia, it read.

The document comes to light after the Maurice Kamto coalition won the presidential elections. The vote has been widely criticised as flawed. The ballot took place following a more than two years of intensified repression of Southern Cameroonians, Biya regime critics and independent media that has seen some 4000 Southern Cameroonians killed, several hundred  jailed and some 50,000 living in refugees camps in neighboring Nigeria.  There has since been an escalation in the surveillance of opposition groups and critics of the regime, sources said.

Cameroon government spies are currently standing outside Prof. Kamto’s residence and at his political headquarters disguised as news reporters or motorcycle taxi drivers. The Biya spies have been following everyone in the Kamto coalition in Douala, Yaounde and Bafoussam.

There are widespread complaints of police disrupting or shutting down meetings involving the Maurice Kamto Campaign. Recently, Senior Divisional Officers have started demanding that press conferences and political meetings should be banned.

A source, who requested anonymity for fear of reprisals, told this reporter that they had heard from sources in Cameroon’s secret service that a meeting had been pencilled in for the end of this week to draw up a list of top Bamilekes to be monitored by the regime.  The Betis have recruited many social media gurus to help in the fight to guarantee Biya’s continued stay in power.

The CPDM regime is mixing traditional techniques such as physical surveillance and intimidation with modern approaches including the use of digital tools in CAMTEL, the Ministry of Post and Telecom and the judicial system to silence Kamto and his coalition and by extrapolation, the Cameroonian people. Any hopes that space for critical voices would re-emerge after the October 7th election had been quashed.

The constant monitoring, intimidation and harassment of religious leaders and the corresponding lack of transparency and accountability when it comes to attacks against opposition figures has created an atmosphere of fear and insecurity.