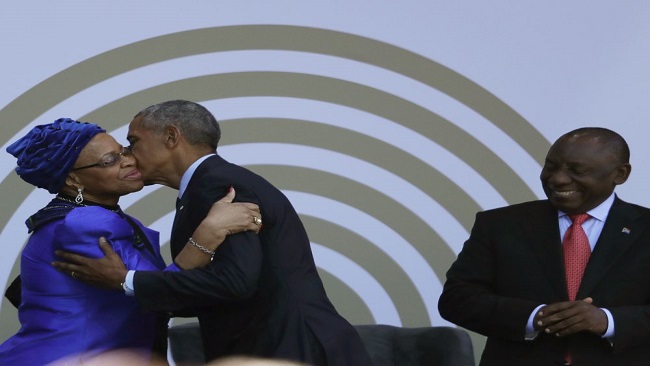 Obama emerges from shadows to honour Mandela in South Africa 0

Former US president Barack Obama steps out of the shadows on Tuesday to mark the 100th anniversary of the birth of anti-apartheid leader Nelson Mandela, in his most high-profile international appearance since leaving office.

Obama made headlines earlier this week with a visit to Kenya, his father’s homeland. But he has otherwise stayed largely out of the political spotlight during his post-presidency, quietly meeting with world leaders and groups away from the camera’s glare.

The choice of Obama to honour Mandela – who is also affectionately known as Madiba – on the centenary of his birth is a highly symbolic one.

“We thought to ourselves, ‘Who can best represent the legacy of Madiba? Who took the baton when he became president of his own country? Who would be able to deal with issues of democracy in a world ripped apart by corruption?’” Sello Hatang, chief executive of the Nelson Mandela Foundation, said when announcing Obama as the keynote speaker.

In keeping with tradition, Obama is not expected to comment on his successor, President Donald Trump. Instead, his speech will reflect on Mandela’s legacy, which Obama said “makes me want to be better” in a eulogy following the anti-apartheid leader’s death five years ago.

Mandela, who was imprisoned for 27 years over his campaign to end apartheid, was at the forefront of the fight against South Africa’s white minority rule, He was  released from prison in 1990, and elected the country’s first black president in 1994. His leadership was marked by his steadfast commitment to reconciliation, diversity and equality.

In some ways, Mandela’s life serves as a counter-example, if not a silent rebuke, of the divisive politics Trump has embraced.

“In the US and around the world, many see recent developments that run counter to Mandela’s legacy,” Benjamin Rhodes, a longtime adviser and former speech writer for Obama, told the Associated Press. “This will be a globally minded speech, highlighting global trends and focusing on how, in his life, Mandela embodied perseverance. It will be aimed at young people in Africa and also around the world to show that we have been through darker times before and we can overcome these challenges to keep Mandela’s vision alive.”

South African President Cyril Ramaphosa and Mandela’s widow Graça Machel will introduce Obama ahead of his speech at the Bidvest Wanderers Stadium in Johannesburg. Around 9,000 people were expected to attend the event, according to the Nelson Mandela Foundation, which will live stream it on its website at 2pm local time (GMT+2).

Obama will remain in Johannesburg afterwards to launch his foundation’s “Leaders: Africa” programme, which will bring together 200 emerging figures from across the continent for a five-day workshop aimed at exploring solutions to the biggest challenges in their communities.