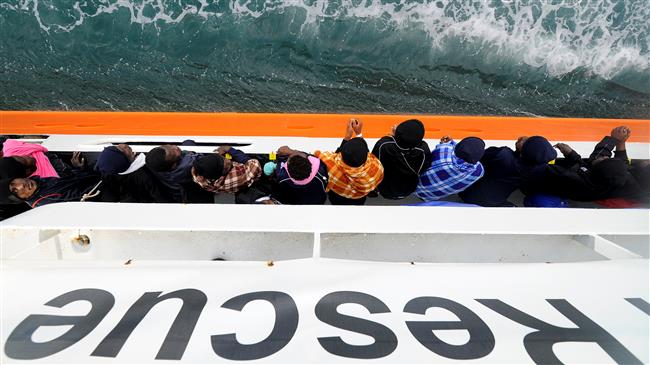 Hundreds of refugees remain stranded in a humanitarian ship at sea after both Italy and Malta refused to open their ports to the vessel and engaged, instead, in a diplomatic spat over the issue.

Italy’s new Interior Minister and leader of the far-right League Party, Matteo Salvini closed Italian ports on Sunday and refused to let in the rescue boat, Aquarius, carrying over 600 refugees.

Instead, he sent a letter to the island-state of Malta, south of Italy, threatening to close all the Italian ports if the Maltese government refuses to take the ship.

The European charity group, SOS Méditerranée, which operates Aquarius, said Sunday that the humanitarian ship has on board 629 refugees, including unaccompanied children and pregnant women mainly from sub-Saharan Africans, who were picked up in six different rescue operations off the coast of Libya.

Salvini said in a statement on Sunday that Malta “cannot continue to look the other way when it comes to respecting precise international conventions on the protection of human life.”

“That’s why we ask the government in Valletta to take in the Aquarius in order to offer first aid to the migrants on board,” the statement added.

The Maltese government, however, brushed off the request, saying that the operations took place in international waters off Libya and that “Malta is neither the competent nor the coordinating authority in this case.”

“As such Malta will not take the said vessel in its ports,” the statement added.

Amid the spat, the ship remains stuck in waters of the central Mediterranean—between Malta and Italy.

The SOS Méditerranée’s spokesperson Mathilde Auvillain said the vessel has been instructed to head north after a series of sea rescues and is now awaiting “definitive instructions.”

Salvini’s far-right party had campaigned heavily on an election vow to stop new refugee arrivals; in addition to closing the country’s ports, Salvini has also pledged to speed up deportation of refugees.

The Italian interior minister has said he is mulling over action against organizations rescuing refugees at sea. He has accused the air groups of collaborating with human traffickers, calling on NATO to help Rome “defend” its southern shores.

Salvini’s anti-refugee stance has sparked criticism inside the country, with several figures, including mayors of Palermo, Taranto, Rinaldo Melucci, offering to take in the refugees.

The mayor of Palermo Leoluca Orlando said he would allow Aquarius to dock at the Sicilian port.

“Palermo in ancient Greek meant ‘complete port,’” said the mayor. “We have always welcomed rescue boats and vessels who saved lives at sea. We will not stop now.”

Orlando accused the new interior minister of violating international law, saying that Salvini has once again shown that “we are under an extreme far-right government.”

“Naples is ready, without funds, to save lives,” said the city mayor, adding that “if a minister without a heart leaves pregnant women, children, old people, human being to die, the port of Naples is ready to welcome them.”

Over the past five years, more than 600,000 refugees have reached Italy by risking their lives in the sea. Some 500,000 of them are still staying in the country.

According to the United Nations figures, at least 500 people have died this year as they were trying to cross the central Mediterranean. Some 2,853 also lost their lives last year.