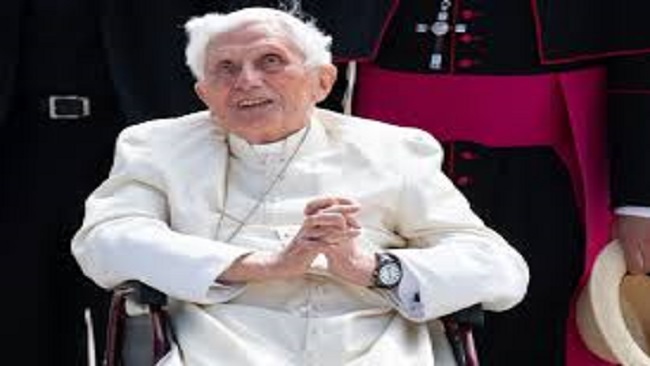 Former pope Benedict XVI has died at the age of 95, the Vatican announced Saturday, almost a decade after he became the first pontiff to resign in six centuries.

“With sorrow I inform you that the Pope Emeritus, Benedict XVI, passed away today at 9:34 in the Mater Ecclesiae Monastery in the Vatican,” Vatican spokesman Matteo Bruni said in a statement.

The German pope emeritus, whose birth name was Joseph Ratzinger, had been living a quiet life in a former convent inside the Vatican grounds since his shock decision to step down in February 2013.

His health had been declining for a long time, but the Vatican revealed on Wednesday that his situation had worsened, while his successor Pope Francis called for Catholics worldwide to pray for him.

His death brings to an end an unprecedented situation in which two “men in white” –Benedict and Francis – had co-existed within the walls of the tiny city state.

Benedict’s funeral will be held in St. Peter’s Square on Thursday, January 5 and will be presided over by Pope Francis, Vatican spokesman Matteo Bruni said on Saturday.

In 2005 the body of John Paul II, the last pope to die, lay in state before a funeral mass in St Peter’s Square attended by one million people, including heads of state.

Benedict had almost entirely withdrawn from public view, his health reported to be shaky and the few photographs that emerged of him exposing his frailty.

Back in 2013, he had cited his declining physical and mental health in his decision to become the first pope since 1415 to give up the job as head of the worldwide Catholic church.

Benedict was a brilliant theologian but his papacy was beset by Vatican in-fighting and a scandal over clerical sexual abuse of children that rocked the Catholic Church the world over, in which he was criticised for a lack of leadership.

The abuse scandal overshadowed his final months after a damning report for the German church in January 2022 accused him of personally failing to stop four predatory priests in the 1980s while archbishop of Munich.

He denied wrongdoing and the Vatican strongly defended his record in being the first pope to apologise for the scandals, who expressed his own “deep remorse” and met with victims.

Born on April 16, 1927, in Marktl am Inn, in Bavaria, Benedict was 78 when he succeeded the long-reigning and popular John Paul II in April 2005, the first German pope of the modern era.

He later said his election felt “like the guillotine”.

Unlike his successor Pope Francis, a Jesuit who delights in being among his flock, Benedict was a conservative intellectual dubbed “God’s Rottweiler” in a previous post as chief doctrinal enforcer.

His papacy was dogged by controversy, from comments that angered the Muslim world to a money-laundering scandal at the Vatican bank and a personal humiliation when, in 2012, his butler leaked secret papers to the media.

Despite saying he would live “hidden from the world” after his resignation, he repeatedly intervened on key issues facing the Church through books, interviews and articles.

In January 2020, he expressed his opposition to allowing priests to marry. A year earlier, he blamed clerical abuse scandals on the 1960s sexual revolution and a collapse in faith in the West.

In an interview in March 2021, he said “there is only one pope”, but acknowledged “fanatical” supporters who refused to accept his resignation.