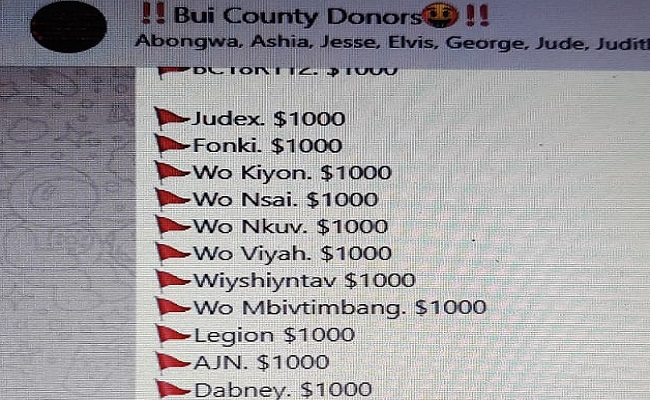 Professional scamming in the Southern Cameroons struggle at unprecedented levels 0

The Vice President of the Southern Cameroons Interim Government Dabney Yerima has told a cream of Ambazonian elites in Germany and Holland that professional scamming and unhealthy politics in the war of liberation in Southern Cameroons has reached extraordinary levels.

“The war in Southern Cameroons has entered a crucial phase! 32,500 Southern Cameroonians killed, 550 Southern Cameroons villages burnt, 125,000 refugees, 1.4million IDPs and 3,000 still detained, yet some so-called front line leaders are feeding Ambazonians with fake draft reports that has reached unprecedented levels, bearing my name and that of Samuel Atem who died four years ago and Mami Epale in Kake-Kumba” Dabney Yerima said in an address to a high-level zoom meeting grouping prominent Southern Cameroonians in Western Europe.

The draft for war sent out by the disgraced former leader who misappropriated funds donated by the people of Southern Cameroons via the scheme My Trip To Buea revealed that Pastor Ikome Sako has now banked the following amount into his IG account:

Vice President Yerima noted that this shameful and disgusting action is a cheap and primitive design to give Ambazonians the impression that there are two rival seats of power in Southern Cameroons, namely the internationally-recognized Ambazonia Interim Government headed by President Sisiku Ayuk Tabe and another group based in Maryland USA known as the Sako-IG.

In the past couple of days, frustrated Southern Cameroonians passing for Sako supporters and  con-men noted for their hunger and poverty in the US and French Cameroun have pushed for the draft for war agenda on social media while ignoring the sufferings of the Ambazonian people.

All attempts to bring about unity among smaller Southern Cameroons groups by the Ambazonia Interim Government have so far failed.