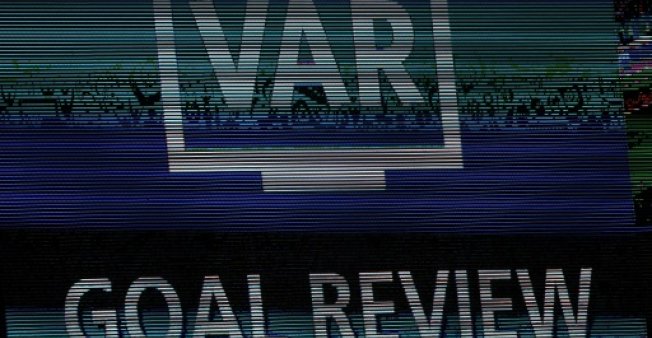 VAR has grabbed centre stage at the World Cup, with the system that was supposed to provide “minimum interference” instead having a major and highly controversial impact.

The final games in Group B on Monday were heading into injury time with Portugal on course to top their group and Spain set to finish second, when the advice of the Video Assistant Referee officials in two separate games changed everything.

In Kaliningrad, Spain were awarded an equaliser to snatch a 2-2 draw against Morocco when an Iago Aspas goal was given after VAR helped Uzbek referee Ravshan Irmatov to reverse a mistaken offside call.

At the same time in Saransk, Paraguay official Enrique Caceres was persuaded to give Iran a penalty for a handball by Portugal’s Cedric Soares that could hardly be considered deliberate.

Karim Ansarifard netted the spot-kick, earning Iran a 1-1 draw, and relegating the European champions to second place in the section.

Now Cristiano Ronaldo and his team must face Uruguay in the last 16. In contrast, Spain will probably be happier with a tie against hosts Russia in Moscow and could now have a theoretically easier path to the final.

That hardly sits well with FIFA’s statement as they introduced the new system to the biggest tournament on Earth, saying: “Our goal is minimum interference for maximum benefit.”

Of course, that was a reference to the flow of the game itself rather than the potential impact decisions could have further down the line.

Morocco’s Noureddine Amrabat made clear his feelings at the end of Monday’s game as he looked into a television camera and mouthed: “VAR, it’s bullshit”.

But while Spain’s equaliser was correctly given, the decisions in Saransk were more controversial.

Ronaldo missed a penalty awarded after the referee reversed his decision, and was later shown a yellow card following a review of a possible elbow offence.

It had the look of a fudged decision when an elbow would normally lead to a red for violent conduct.

“An elbow is a red card in the rules. In the rules it doesn’t say if it is (Lionel) Messi or Ronaldo,” fumed Iran coach Carlos Queiroz, who said VAR was “not going well”.

Iran are now out, and they leave a competition that is being dominated by VAR to an extent possibly greater than the system’s critics could have imagined.

There have already been 20 penalties given at this World Cup, a tournament record before the group stage has even concluded.

Many of those, such as Andreas Granqvist’s winner for Sweden against South Korea, were awarded after confirmation by VAR.

Yet the Swedes were also the victims of a major officiating error when they were denied an early penalty in their defeat against Germany for a foul by Jerome Boateng on Marcus Berg that was clear on slow-motion replays.

“If we have the system it’s very unfortunate that he doesn’t feel he can go and have a look,” said Sweden coach Janne Andersson of Polish referee Szymon Marciniak.

As the International Football Association Board (IFAB), the guardians of the laws of the game, say, only the referee can initiate a review.

One of the officials in the Video Assistant Referee team sees an incident and tells the referee, who then decides whether to review it. The system is clearly not flawless, and that inevitably leads to frustrations.

There might also be a concern that reviews of slowed-down replays can make in-game incidents appear worse than they were in reality.

In addition, the system can still lead to confusion for fans in the stadium who do not have the same grasp of what is happening as television viewers.

FIFA will have been braced for the criticism, and will defend the system during a briefing on Friday, at the end of the group stage, at which refereeing chief Pierluigi Collina and VAR project leader Roberto Rosetti will appear.

“It will enable us to present detailed analysis and statistics illustrating the results of VAR during the initial phase,” world football’s governing body told AFP.
Culled from AFP