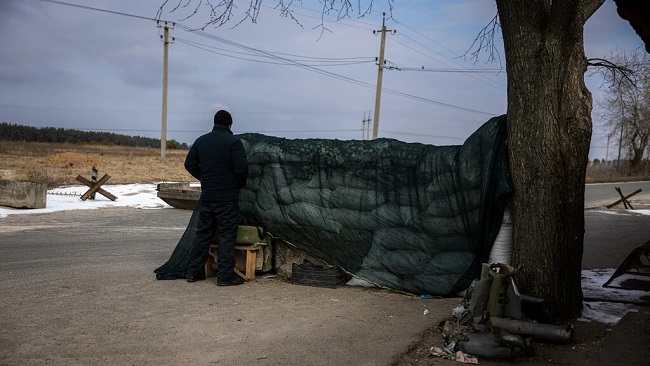 Russian tanks are getting close to the Ukrainian capital 0

At a deserted service station on the motorway northeast of Kyiv, a Ukrainian officer warns: “Don’t go any further. The Russians are over there.”

Over the last five days, the Russians have advanced more than 80 kilometres (62 miles) on the northeastern front and are getting close to the Ukrainian capital.

The Ukrainian officer in camouflage points towards the north, where the motorway stretches empty to the horizon between snow-covered fields.

“The Russian tanks are just over there, two kilometres away,” he said, ordering a civilian vehicle to turn round and go back, due to the danger from Russian forces.

“Drive in a zig-zag to avoid their shots,” he advises the driver.

Then he returns to his watch, in charge of around a dozen soldiers whose task it is to pass on information on Russian tanks so that the Ukrainian army can bomb them as soon as they move to break through the lines.

The Russian tanks are stationed just a few kilometres away from Kyiv’s city limits.

Last Saturday, the Russians were about 80 kilometres further up this road, on a level with the city of Chernihiv.

This advance along the motorway from the north brings Russian tanks just to the east of Kyiv, heightening fears that they could soon encircle the capital.

Russian tanks are also just a few kilometres from the city to its northwest.

In the surrounding villages, there are few cars on the road and they drive with utmost caution in what is now frontline territory.