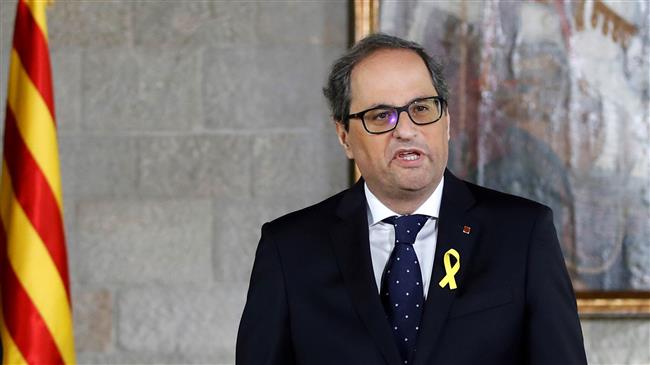 Quim Torra, Catalonia’s new separatist leader, was sworn in Thursday during a brief ceremony without central government representatives in which he avoided promising to obey the constitution and pledged instead to follow “the will of the Catalan people”.

The ceremony marks the end of nearly seven months of political limbo in the northeastern Spanish region, which has been under direct rule from Madrid since the central government deposed Catalan president Carles Puigdemont following a failed declaration of independence on October 27.

“I promise to loyally fulfil the duties of the post of regional president being faithful to the will of the Catalan people represented by the Catalan parliament,” Torra said as he was sworn in, using the same formula as his predecessor and mentor Puigdemont.

The 55-year-old did not promise to obey the Constitution nor the statute that regulates Catalonia’s autonomy.
He appeared flanked only by a Catalan flag, without the traditional Spanish flag and portrait of the king that protocol states must be present, in a small side-room of the regional government building in Barcelona.

Spanish Foreign Minister Alfonso Dastis criticised the ceremony, saying it done “on the sly”, as if Torra “were a second-rate president”.

The hardline separatist Torra was handpicked by Puigdemont, who is currently in Berlin awaiting potential extradition to Spain, where he faces jail on charges of rebellion and misuse of public funds.

He has stressed he is merely a “caretaker president” as he awaits the return of Puigdemont, whom he considers the “legitimate” leader, and has pledged to keep fighting for independence from Spain.

Torra’s swearing-in ceremony only lasted a few minutes and the central government decided not to send any representatives in a sign of tensions between the two.There were no representatives of political parties or civil society either.

As a deferential gesture towards Puigdemont, Torra did not put on the medallion that regional presidents usually wear when they are sworn in.Now Torra needs to form a government, a prerequisite for Madrid to lift direct rule.

But this isn’t assured as Torra has said he wants to reintegrate deposed regional ministers into his government, many of whom are either in preventative custody for their role in the secession drive or in self-exile like Puigdemont.

If the Spanish government decides this is illegal, it could maintain direct rule over the region as requested by center-right party Ciudadanos, whose hardline stance towards the Catalan crisis has resounded in Spain.

The party is now threatening to overtake Prime Minister Mariano Rajoy’s Popular Party in regional and municipal elections next year.

In the more immediate future, however, Rajoy needs the support of the Basque Nationalist Party (PNV) in parliament to approve the 2018 budget.

The PNV wants Madrid to lift direct rule as it strongly supports regional autonomy and is sympathetic to the Catalan cause.
Caught between the two, Rajoy has pledged to watch Torra closely and maintain control over regional finances to avoid public money going to any separatist initiatives, and has also said he is willing to meet the Catalan leader.

Meanwhile, another battle is going on in the courts, with 25 separatist leaders being investigated for rebellion or other offences, nine of whom are in preventative custody and another seven abroad.

On Wednesday, a Belgian judge rejected the extradition request of three former Catalan ministers due to irregularities in the arrest warrants, dealing a blow to Spain.

A court in Germany has also rejected extraditing Puigdemont to Spain for rebellion, a very serious charge that implies violence took place and which many legal experts have discarded.

The court is still considering whether to hand him over to Spain on the lesser charge of misuse of public funds.
Faced with these setbacks, Spain’s Supreme Court has said it is was considering replacing rebellion with sedition, which does not imply violence took place and is less severe.