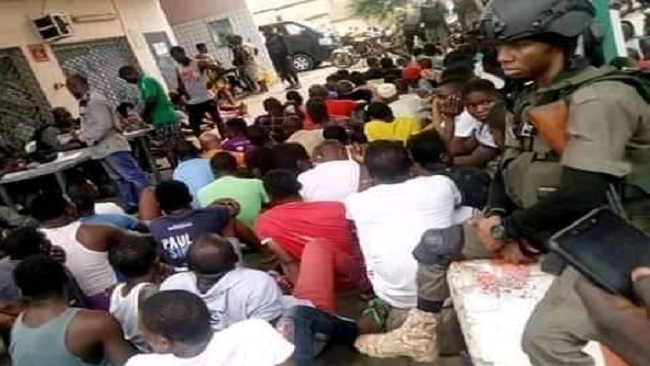 Cameroon’s military is obliging civilians in the two English-speaking regions of the country to take voter’s card which are not even in their names.

In Kumba a young man was shot in the hand in on Friday, February 7, 2020, by a B.I.R officer, as government forces scramble to get more people to vote for the failed ruling party.

There are desperate efforts to to get the young man to Douala for treatment, as nothing is working in Kumba due to the lockdown.

Across the two English-speaking regions of the country, there are massive arrests by the military.

Thousands of people have been arrested in Buea, most of who are university students and their whereabouts are not known.

It is believed that they will be released at the end of voting on Sunday, as they will be made to wear the famous CPDM attire to demonstrate that many people in the region are in support of the party that has been in power for 37 years and has nothing to show for its long stay in power.

In Mamfe, the story is the same. The government’s intimidation is on display. In Ossing, a town some 5 km from Mamfe, all the able-bodied young men and women has now taken up residence in the jungle as army soldiers move from house to house looking for young people to arrest for election purposes.

In Bamenda, the military has been poisoning the environment with its music and noise, calling on civilians to see the sex-starved, alcohol-inflamed and trigger-happy military as a friend and not a foe.

After having killed thousands since 2016 when the crisis started, the government is just realizing now that its military approach has been counterproductive.

More than 5,000 Southern Cameroonians have been killed and more than 200 villages have been razed by the military as a strategy to end the insurgency in the two English-speaking regions of the country.  But the results of the strategy leave much to be desired.

More than 90% of Southern Cameroonians have been radicalized, and even the moderates have had to walk back on their decision, as government bullets bring down their families and friends.

Besides, the human cost, the economic cost is also staggering. The country’s economy has taken a nosedive due to the conflict.

State-owned Corporation such as SONARA, PAMOL and CDC, all located in the country’s southwest region, has taken a hit and this has robbed the government of vital financial resources.

Thousands of people have been laid off following the collapse of these major state-owned corporations and the future is still bleak, as the end of the crisis is not in sight.

Over the last two years, the international community has been calling for an inclusive dialogue that the Yaounde government has dismissed.

The Swiss initiative supported by Canada and the United States has also been rejected by the government, although Southern Cameroonian groups fighting for the total liberation of their territory have welcomed the initiative and have agreed to meet with Yaounde government officials in a neutral place.

Instead of accepting the international community’s proposal, the Yaounde government hastily organized its own initiative in October 2019 which it branded as the Major National Dialogue.

The government limited the issues to be discussed and it manufactured its own Diaspora that participated in the pseudo-dialogue.

From the dialogue, it emerged that a special status would be granted to the country’s two English-speaking regions, but the contents of the special status remain a mystery.

Since October 2019, following the Major National Dialogue, the government has unleashed the full spectrum of its military strength on the people of Southern Cameroons, killing thousands and burning hundreds of villages.

It would appear part of the special status is to reduce the population of the two English-speaking regions of the country.

But from every indication, the people of Southern Cameroons have turned their backs on the government. The majority want a clean disconnection from a country that has brought them death and destruction.

For now, no government initiative can change the mentality of a people who have experienced marginalization for half a century.

If the government wants to win hearts and minds those regions, then it must embrace the Swiss initiative and order its forces to stop maiming and killing innocent civilians.

By Soter Tarh Agbaw-Ebai in the Uk