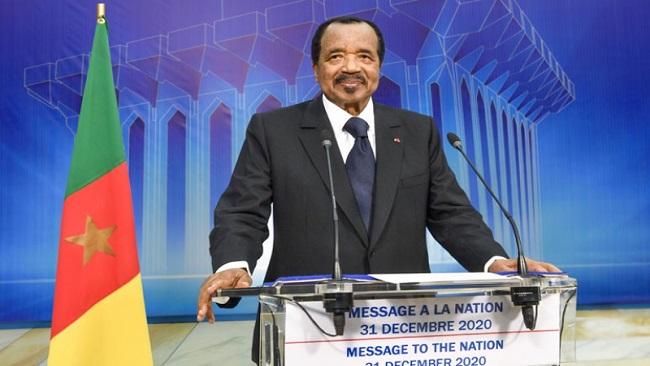 Southern Cameroons Crisis: Biya is completely out of touch with reality 0

Despite all the disappointments of the last four years, some Cameroonians were still glued to their TV sets on Thursday, December 31, 2020, hoping that time might have triggered a change of mind in a man who is completely out of touch with his country’s reality. Cameroon’s president, Paul Biya, who is completely out of ideas on how to address some of the major issues facing his country, addressed the country, placing COVID-19 above national issues which have rendered the country ungovernable.

Even with COVID-19 where his government has left Cameroonians to their own devices, the ailing and confused 87-year-old Biya was quick to point out that 2020 would “undoubtedly be remembered as a dark year marked by hundreds of thousands of deaths worldwide,” adding that “like almost all countries, Cameroon was affected, perhaps less severely than other States.

He also wondered that “should man take the blame because of his wanton exploitation of the planet’s natural resources and his constant engagement in conflicts leading to massacres and diseases, as well as experiments to develop new weapons?” By asking this question, Mr. Biya who declared war on Southern Cameroonians some four years ago failed to understand that his own constant engagement in conflicts has led to massacres and diseases in Southern Cameroons. While he points a finger at others, he fails to realize that he is the architect of the disaster that is playing out in Southern Cameroons.

The sick and corrupt octogenarian also pointed out that “I have personally observed that most of our fellow citizens no longer comply with the protective measures prescribed by the Government. At a time when, everywhere else, there is a second wave of the epidemic, coupled with the appearance of a new and more contagious strain of the virus, I urge you once again to put on your face masks, to wash your hands regularly and to consult a physician or any other health personnel if you notice any symptoms. This is the only way to save lives and to curb the spread of the virus.”

He, however, fails to acknowledge that if Cameroonians have walked away from their masks, it is more because his corrupt government lacks the capacity to implement its own policies and decisions. The resources placed at the disposal of the health ministry to fight the highly infectious virus have been embezzled and misappropriated by members of his government and being faithful to his do-nothing attitude, he has been indifferent to all the allegations against the health minister and the thieves in his government are not concerned about any arrests because they know they have not committed the worst crime in Cameroon – eying the presidency.

Regarding the insecurity in Cameroon brought about by the insurgency in Southern Cameroons and in the country’s northern region, the low-energy president was quick to blame everything on external forces though it is known globally that the unfortunate military drama playing out across the country is born out of the government’s intolerance, arrogance and corruption.

“In recent years, our country has been facing external threats, particularly on our eastern border and in the northern part of our country. In the first case, the threat comes from highway robbers lured by easy prey, namely peaceful stockbreeders and their herds. In the second, the threat now takes the form of isolated raids by Boko Haram or suicide bomb attempts by teenagers. The effective vigilance and action of our Defence and Security Forces have significantly reduced the activities of these criminals,” he said.

But his assessment of the situation is not accurate. If the assessment is not his, then he has been given a sanitized version of the report which clearly underscores that Boko Haram is bombing Cameroonian soldiers out of existence. Thousands have died and many have been maimed by the highly destructive religious sect.

In Southern Cameroons, the president who has never visited ground zero was quick to present a good picture of a very bad situation in which more than 6,000 Cameroonians have lost their lives. “The situation is different in the North-West and South-West Regions where armed groups maintain an atmosphere of terror and insecurity. They attack isolated communities and educational institutions from time to time to discourage parents from sending their children to school. The list of atrocities and crimes committed by these groups is already long. One of the most heinous of them is that which took place in Kumba recently, resulting in the death of seven school children with several others injured.”

This is really where Mr. Biya has demonstrated that he is good material for psychological and mental analyses. His government has lost credibility and Cameroonians are no longer dupes. The slaughterers of school children across Southern Cameroons are vicious elements unleashed on the population by Atanga Nji, the country’s territorial administration minister, who is an ex-convict. The government has been so desperate to prove to the world that it has a handle on the situation to the point where it has resorted to killing innocent civilians. Ngarbuh, Kwakwa, Muyengue and other towns in the two English-speaking regions are still very fresh in most minds and Cameroonians understand that their government speaks from both sides of its mouth.

“This crime, which is a shock to the human conscience, will not go unpunished. All the perpetrators will be hunted down relentlessly and brought to justice.” Mr. Biya was totally right here, but he was addressing the wrong audience yesterday and he has been doing this for years. He should be telling this to Atanga Nji, Joseph Beti Assomo and the military generals who are the architects of such diabolic and cruel acts in Southern Cameroons.

“Already, public opinion, particularly in the two regions concerned, can realize, if that is not yet the case, that these so-called “secessionists” are actually nothing more than murderers, and what is more, murderers of innocent children. To say that the Kumba carnage caused widespread outrage is an understatement.” Indeed, it is an understatement. Which government in the world still kills its own citizens like the Biya government has been doing over the last four years? It is not Southern Cameroonians who are secessionists, but a government that is wont to corruption, brutality and injustice. The Yaoundé government has been sowing the seeds of secession for decades and now that it is dealing with a bumper harvest, it is blaming everybody, except itself.

The purposeless president who now spots a toothless mouth said he would be downloading his responsibilities on other nations. “I would now like to appeal, once more, to the sense of responsibility of the friendly countries hosting the sponsors and of the organizations financing and running the armed gangs in the North-West and South-West Regions, through various channels. All those who would be identified at the end of investigations as initiators or accomplices of these odious crimes will answer for their actions,” he said. But true democracies do not arrest people and send them to their death. The corrupt Yaounde government might have succeeded in Nigeria in its illegal arrest and detention of the Southern Cameroonian President, Julius Ayuk Tabe, and his collaborators because it worked with another corrupt and lawless government, but it will not succeed in countries such as the USA, Canada, the UK, Germany and Australia where some 4 million Southern Cameroonians are residing because in those countries, there is genuine democracy and the rule of law. Mr. Biya must stop dreaming the wrong dreams if he is thinking of genuine peace.

Despite his manifest failure in the country’s two English-speaking regions, Mr. Biya continues to promote the false idea that his government is pursuing dialogue. “Yet our Government has continued to demonstrate its commitment to openness and dialogue by, for example, releasing many former secessionists and facilitating their reintegration into society.”

Furthermore, after the Major National Dialogue, the Government fast-tracked the implementation of an ambitious decentralization policy which includes a special status for our North-West and South-West Regions, which takes into account their specificities and aspirations.” The comedy he and his government organized in 2018 was nothing more than a monologue that was doomed to failure. His special status to Southern Cameroonians came with massive violence and death to innocent civilians. He should be too old and blind not to understand that Southern Cameroonians simply do not care about his “Special Status of Death.”

He senility does not let him figure out that his collaborators are taking advantage of him. He does not seek to know anything. He depends on false and sanitized reports. In his warped thinking, he holds that he can urge the brave fighters of Southern Cameroons to abandon their noble objectives to submit themselves to the madness he and his collaborators have organized in the name of DDR. “I once more urge the youths who have been enlisted in armed gangs to come out of the bush and sign up with the Disarmament, Demobilization and Reintegration (DDR) centers in order to return to a normal life, like their other young compatriots,” he said.

“The prevailing insecurity in the North-West and South-West Regions has caused untold damage to our country. Our democracy allows for the peaceful expression of all opinions, in compliance with the laws and regulations in force. Otherwise, peace and stability would be jeopardized,” he said. For once, he acknowledged that the Southern Cameroons crisis had hurt the country in more ways than one. However, if he does not prioritize genuine dialogue over the hypocrisy he and his collaborators have been organizing, the country will continue to go down the drain.

He has a choice – continue to talk tough and let the country continue in its downward spiral or speak the language of peace in order to appease the people of Southern Cameroons. Though there are many Southern Cameroonian factions involved in this struggle, many are of the view that their goals could be achieved through genuine dialogue held in the presence of a neutral third party. President Julius Ayuk Tabe and his team are willing and ready to sit at the negotiating table where they plan to professionally articulate Southern Cameroonian ideas on the way forward. It is up to Biya to come down from his high horse and make things happen sooner rather than later.