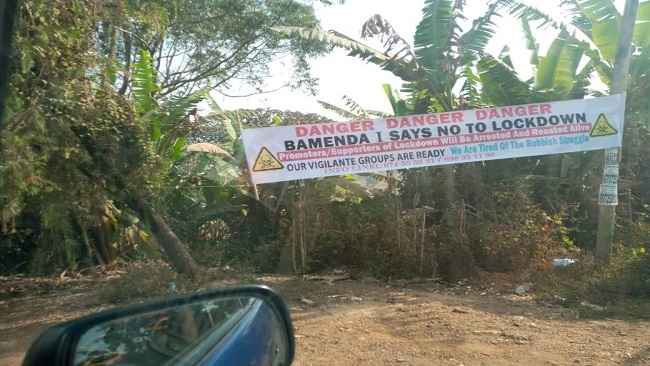 As election day approaches and doubts about the holding of the election in the two English-speaking regions of Cameroon grow, ruling party (CPDM) officials are now financing terrorist groups to intimidate civilians in the English-speaking parts of the country.

According to a source close to the CPDM, the government party that is responsible for the corruption in country, government officials are paying young hungry men to intimidate the population in the hope that they will go out and vote or they will be seen as supporters of the rebellion.

The tactics vary from town to town and from the above banner, it is clear that the government is paying some ghost workers to put up those banners which are designed to intimidate Amba fighters .

The government has been working hard to turn tables on the fighters by creating parallel groups that do pose as Amba fighters.

Some of the groups set up by the Territorial Administration Minister, Paul Atanga Nji, have been kidnapping civilians and asking for huge ransom.

In certain cases, government-created groups have been working closely with government troops and they have been razing villages; a strategy aimed at pushing the innocent population onto withdrawing its support of the genuine Amba fighters who have proven, on many occasions, that they are working for the population.

Last week, government forces went on a home destruction spree in the northwest region, an initiative that has left many old people homeless and this exposes the vulnerable to the elements, especially as harmattan is sweeping across the two English-speaking regions of the country at this time of the year.

But the killing- and home-burning sprees are not helping government efforts as they are radicalizing many in the region and uniting the Diaspora that is hell-bent on bringing about genuine democratic change in Cameroon.

The Yaounde government has decided to organize twin elections in February 2020 in Cameroon against the advice of the international community that has clearly pointed out that elections cannot be held in the two English-speaking regions of the country because of the government-sponsored and government-approved violence that has left more than 5,000 people dead.

From October 2016 when the crisis in Cameroon’s English-speaking regions started, some 270 villages have been burnt down, with the old and mentally ill being some of the victims of the government’s disproportionate use of force to quell a rebellion that started as protests by teachers, students and lawyers.

Over the last three years, many state-owned corporations in the two English-speaking regions of the country have gone under, as Amba fighters have constituted a real threat to workers of these corporations.

CDC, PAMOL and SONARA have all run into massive storms which have put them out of business.

PAMOL was a secure revenue stream for the corrupt and inefficient Yaounde government while the CDC and PAMOL offered government officials the opportunity to have their girlfriends and relatives recruited at senior levels in corporations that have been white elephant projects for years.

Though located in the country’s southwest region, SONARA which is the country’s lone refinery, has been predominantly Francophone; something that has caused huge and intense friction between the government and the English-speaking minority.

As the government insists on using violence to address the issues raised by the country’s English-speaking minority, the country’s economy has continued its relentless march towards the bottom of the abyss.

More than 2 million English-speaking Cameroonians have been displaced, with some 500,000 living in Nigeria where they are living rough.

After more than three years, it is clear that the government’s military violence is not the right medication for a problem many around the world hold that a genuine and inclusive dialogue could deliver better results than what government atrocities have achieved in three years.

In October 2019, the government demonstrated its ineptitude and dishonesty when it hastily organized a major national dialogue that was major just in name.

To hoodwink the international community into believing that the so-called dialogue was inclusive, the government invented its own Diaspora which comprised desperate and cash-strapped individuals.

The real Diaspora was never invited and even when the government advised that members of the real Diaspora could attend, the plan was to arrest them when they arrived Cameroon; a plan that failed woefully as it was leaked by some French-speaking Cameroonians who are also against the corrupt government.

It should be mentioned at this juncture that many of the resolutions and recommendations of the so-called major national dialogue were already known as there were strict instructions that discussions at the forum must only be limited to the country’s president’s prescription.

A source close to the (dis)Unity Palace, the name of the country’s presidency, has revealed that the government is very concerned about the situation in the two English-speaking regions of the country, as it has not been able to roll back the rebellion after three years.

The source, which elected anonymity, advised that if the country’s Diaspora could be more united, the government would yield to its demands.

It added that if the Diaspora’s fundraising capacity had remained at the 2017 and 2018 levels, the crumbling government would have yielded to the pressure.

The source called on the Cameroon Concord News Group to urge all the factions to unite in order to bring pressure to bear on the government.

It stressed that the Yaounde government trembles each time an American official dwells on government atrocities and the need for an inclusive dialogue.

The source indicated that increasing divisions within the Southern Cameroonian Diaspora are given the beleaguered government a lot of hope that it could break the back of the rebellion sooner rather than later.

The government’s recent display of force by sending over a thousand forces of lawless(ness) and (dis)order to the region is designed to intimidate Amba fighters and to prove to the world that it is capable of organizing elections across the entire country, including in the restive anglophone regions.

Despite the extreme brutality unleashed by the government on the civilian population, a huge majority of Southern Cameroonians still stand solidly behind their fighters who have given the government’s sex-starved, alcohol-inflamed and trigger-happy soldiers a run for their money.

With the government still counting on military violence as a cure for the crisis and Amba fighters holding that independence is the answer, the days ahead are really bleak and many more lives are clearly on the line.

The international community has to be more aggressive in its efforts to find a long-lasting solution to the genocide playing out in Cameroon.

The positions of the warring parties are clear and only a strong third party like the United Nations or United States can truly engineer a satisfactory solution, failure of which, banners like the one above will continue to pop up.