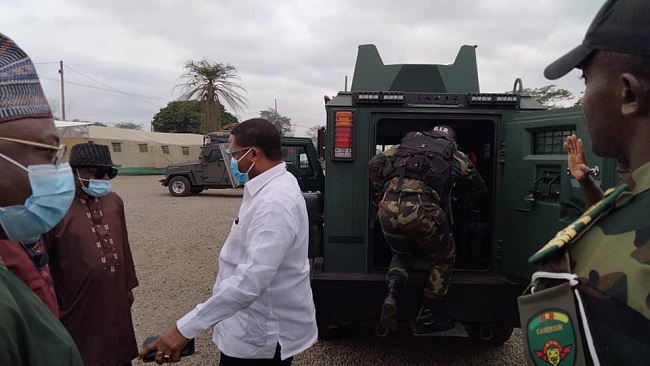 As the crisis in Southern Cameroons gets into a critical phase, so too has the Yaoundé crime syndicate decided to step up its clowning efforts.

While the government seeks to give the impression that things are returning to normal in the two English-speaking regions of the country, the reality on the ground points to a more dangerous situation, with fierce separatist forces bringing down some careless army soldiers who seem to believe the lies their government is spreading.

Last week, the minister of special duties at the presidency, Mengot Victor Arrey Nkongho, and the Senator from Manyu Division, George Tabetando, stole themselves into Mamfe where they were received by very few soldiers in order not to attract Amba fighters who have put a price on the heads of those two officials considered by Southern Cameroonians as traitors.

Though suffering from multiple illnesses, especially a bad leg, George Tabetando had to endure the 10-hour trip to Mamfe just to demonstrate that things are returning to normal.

But the CPDM crime syndicate is not deceiving anybody. Many soldiers are being brought down by separatist bullets and this is demoralizing many soldiers who get deployed in the two English-speaking regions of Cameroon.

The situation on the ground is disturbing and not many people serving under the Yaoundé government are happy to serve in Southern Cameroons.

Even Tabetando and Mengot are not happy going to Mamfe in an armored car. They know a simple error on their part could be a death sentence that can never be commuted.

In the Amba court system, death sentences don’t get commuted. Once a person is declared guilty, theirs is the kingdom of death.

For Mengot and Tabetando, their trip to Mamfe was basically for the optics. They did not achieve anything and nothing will change just because they have visited the region.

If anything was achieved, it was just the huge amounts of food and drinks that the two CPDM enablers downed while hiding in their military protected zone as seen in the video attached to this story.

There is already a hike in food prices in Mamfe because of Mengot and Tabetando. The Yaoundé government has been looking for a way to hem in the Manyu population. It has now found a new and innovative way – sending Victor Mengot and Chief Tabetando to eat themselves into obesity and diabetes.

They had a treat from the military that they won’t be forgetting anytime soon. The sumptuous meal of puff puff and beans cooked by the military did only put them to sleep; it also triggered a diarrheal crisis during their return trip to Kumba. Luckily the bushes were happy to serve them and Amba boys were not close by. The story would have been different today.

According to a source close to the military, the arrival of Tabetando and Mengot in Mamfe is bad news to the local population that is really struggling to meet its food needs.

If this ugly situation is to be addressed then the farmers of the region will have to get to work to increase food production.