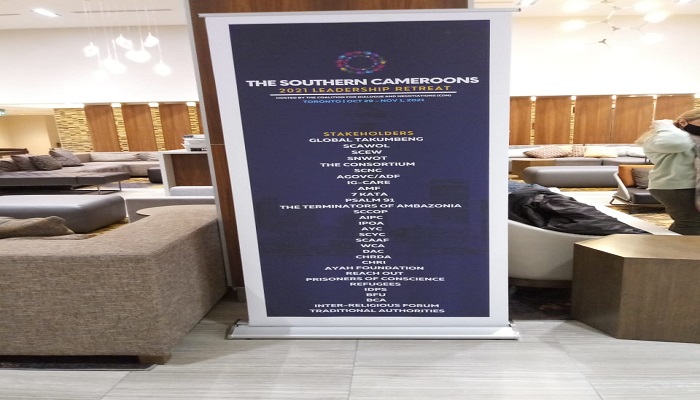 Cameroonians across the globe have been scanning the horizon for five good years in search of hope and the Toronto meeting seems to be that bright spot the people of Cameroon have been searching.

After a few days of deliberations, the various factions are gradually inching towards meaningful agreements which might change the situation in Southern Cameroons.

Many factions present at the august meeting now hold that dialogue is the ideal way forward and key actors are gradually gyrating towards a federal system that will be similar to what obtains in Canada.

Speaking at one of the major sessions, Barrister Felix Nkongho Agbor-Balla made a strong case for federalism, arguing that Cameroon could still be united within a solid federal structure patterned on the Canadian system which has brought peace to Canada, a country that has had a history of dealing with linguistic minorities.

Participants at the Toronto meeting are narrowing their differences and now understand that fighting alone will not deliver the results they want and that the international community has little or no appetite for secession, especially those based on language.

The participants were carefully chosen and the civil society was invited and Barrister Felix Nkongho Agbor-Balla who is known worldwide is a symbol of those who hold that Cameroon could be federally united and indivisible and his involvement in human right activities and legal justice make him a key player in the negotiations.

Conspicuously absent at the meeting are key members of the Sako faction which is currently embroiled in a bitter internecine fighting.

The fight between Dr. Sako Ikome, whose faction has been losing clout for sometime now, and Secretary Chris Anu has kept their faction from any preliminary talks.

A source at the Toronto meeting has hinted Cameroon Concord News Group that Dr. Sako who was once popular after the arrest of Sisiku Julius Ayuk Tabe is gradually being dumped on the ash heap  of history because of his extremist views.

The organizers of the conference which include the US State Department, the Vatican, Canada and Greenclee which negotiated the Good Friday agreement in Northern Ireland are hopeful that the meeting will deliver hope to a people who have been hopeless for more than four years.

“The objective of the meeting is to help all the factions to strike a good understanding of the situation and ensure that the message of peace being promoted by the Swiss team and other stakeholders is clearly and fully being understood by all the participants, including the Cameroon government which is using back channels to call for peace through talks,” a meeting participant who elected anonymity said on the sidelines of the meeting.

“All of us attending the meeting are gradually coming to terms with the fact that a military victory is impossible in Southern Cameroons. If we need peace, we must talk. We have to rise above our egos in order to bring peace to our people who have been suffering over the last five years because of a disagreement that could have been easily addressed,” the source added.

“We can never thank the organizers of this meeting enough. We are hoping that the government which has been using diplomatic means to pressure the various factions, will accept the proposals which will be submitted to it at the end of this important meeting,” the source stressed.

“The government must come to terms with the fact that Cameroon has changed for good. The current crisis is a clear indication that the country’s current political configuration needs an overhaul and that must come sooner rather than later. A new page of our history is being written in Toronto, Canada, and I hope future generations will be pleased with this major step that will help us put an end to the scourge of war that has killed many Cameroonians,” the source underscored.

As of today, some one million Southern Cameroonians are either  internally displaced or are seeking refuge in a neighboring country due to a conflict many observers say was avoidable.

Thousands of army soldiers whose consciences could not allow them to kill innocent civilians have left the country to escape the harsh punishment the government inflicts on soldiers who do not want to implement the decisions of the top military brass.

The Toronto meeting is not a panacea and it is not designed to sweep key issues under the carpet. It is indeed an opportunity that will lead to other meetings which will be attended by most of the warring factions.

According to another participant who also elected anonymity, the meeting actually brought in many stakeholders, including  observers from the USA, Ireland, Britain, Switzerland, Norway, and Canada.

Additionally, there were presentations by Canadian Professors and discussions on the Irish experience regarding the liberation war against the British, which also involved the IRA and Sein Fein.

The Toronto meeting has succeeded in its overall objective of bringing together the significant Southern Cameroonian groups in the Diaspora and Ground Zero.

Meeting participants resolved to work in synergy in the critical aspects of the struggle for decolonization.

They also resolved to begin discussions on working together as a cohesive visible movement with a clear and articulate agenda moving forward, in the key areas of the fight for freedom and humanitarian work.

The meeting, according to other participants, was just the first of many which will be held out of Cameroon, with each having a clear agenda, action points and time lines.

Cameroonians have a reason to be hopeful and both the participants and organizer of the Toronto 2021 meeting are relieved  that the very first step forward has been taken.