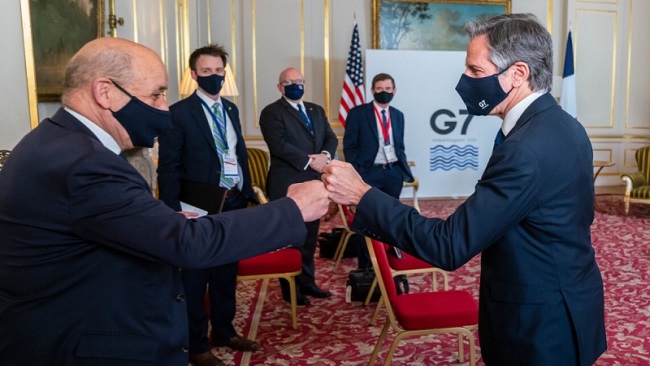 US Secretary of State, Antony Blinken and the French Minister of Foreign Affairs, Jean-Yves Le Drian have reportedly discussed on the sidelines of a G7 meeting in London the crisis in Southern Cameroons.

A press statement made public by the US State Department noted that “the two leaders pledged their support for a peaceful resolution of the conflict in Cameroon and expressed concern about the lack of movement on reforms essential to stability”.

The two top diplomats also reiterated that peace and stability in Africa is a concern for both the United States and France with particular attention to the situation in Southern Cameroons.

It is important to recall that France has always brandished the principle of non-interference in the political affairs of Cameroon to justify its attitude.

President Emmanuel Macron claimed during a visit to Nigeria that he favours the establishment of decentralization and supported this option adopted by the Yaoundé regime in an attempt to resolve the Anglophone problem. But his administration has never pressured the ruling CPDM crime syndicate to accelerate the decentralization process that was agreed and documented in the 1996 Constitution.

Under President Macron’s watchful eyes, the Yaoundé government has been on a home-burning spree over the last four years in Southern Cameroons.

For its part, the American Congress has given the US government the go-ahead to intervene in favour of resolving the conflict. The Foreign Affairs Committee of the United States Congress introduced on 8 September 2020, Resolution 684 on the crisis in the Cameroonian regions of the North-West and South-West and was adopted on 1 January 2021.

Resolution 684 condemned the abuses committed by state security forces and armed groups in the northwest and southwest regions of Cameroon, and affirmed that the United States continues to hold the Government of Cameroon accountable for safeguarding the security and constitutional rights of all its citizens, regardless of region, religion, or political opinion. In addition, it urges all parties to the conflict in Cameroon, the Government of Cameroon, U.S. foreign relations entities, and members of the international community to take specific steps to resolve the ongoing civil conflict in Cameroon.

The U.S. Congress was also critical of France’s action in the conflict.  “…France maintains considerable interests in Cameroon, including significant economic and security cooperation, but has not sufficiently used its influence to stem atrocities committed in English-speaking regions or to support stronger international action to seek a resolution to the conflict,” Resolution 684 said.