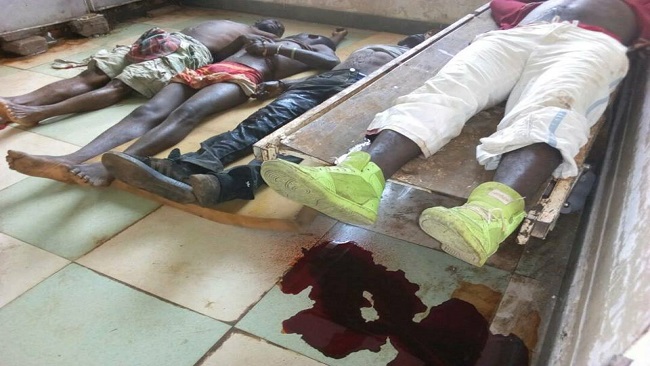 Southern Cameroons Crisis: Where is the international community? 0

For almost two years, Southern Cameroons has been reduced into a slaughter house with government troops killing innocent citizens as if they were not human beings. In many parts of Southern Cameroons, many young men, many of whom are innocent and have nothing to do with the ugly fighting that is playing out over there, have been arrested and taking to unknown destinations. Many have been buried alive, while others have been used by the country’s trigger-happy soldiers as shooting targets.

A recent video that has gone viral online speaks to the accusation that the Yaounde government is committing gross human rights violations in the country’s English-speaking regions. The video, which has shocked many across the globe, is being documented as evidence of human rights abuse by many rights groups which have been seeking to draw the world’s attention to the genocide that is unfolding in Cameroon’s English-speaking regions.

A crisis that started as protests by lawyers, teachers and students in Buea and Bamenda was allowed to spiral out of control due to the government’s firm belief in tough and violent means to address issues. The government’s decision to slaughter hundreds of Southern Cameroonians on October 1, 2017, has turned out to be a very bad mistake. Many Southern Cameroonians who have been victims of the government’s marginalization program simply wanted to express their grievances and frustration. But wont to violence and dictatorial ways of doing things, the government resorted to its legendary violence which has transformed an entire region into a huge killing field.

Today, there are many armed groups in the two English-speaking regions of the country. Over the last four months, many innocent civilians have met their death as the government pursues its policy of collective punishment. Many civilians have seen their homes burnt down by government forces which have opted for a “scotch-earth” policy that is hurting many vulnerable people who have nothing to do with the conflict.

In all fairness, what caused the government to adopt the obnoxious “Code of Hammurabi” was the killing of army soldiers by some unidentified gun men. This act should never be extolled, but the government’s decision to come down to the level of a ragtag army clearly calls for a global condemnation, but the international community has remained mute in the face of such flagrant injustice and mass killing of a people who simply want to defend themselves against an obnoxious marginalization that has sent many Southern Cameroonians to an early grave.

The government is an organized structure with institutions whose capacity to investigate crimes has been built over the years. Its actions in retaliation to acts committed by unknown gunmen serve as a testament to its failure to rein in the tough Ambazonian fighters who are determined to take the war to the enemy.

Kwakwa had been considered as a flash in the pan by many government apologists and many people hoped that this unfortunate drama would not repeat itself. But three weeks ago, Mbiim, a small village some 20 kilometers from Kumbo, was the target of these alcohol-inflamed soldiers. During the military onslaught, many houses were razed, food was destroyed, and many civilians were wounded, an act that has been condemned by many Southern Cameroonian activists and opinion leaders.

The human cost of the conflict is staggering. Soldiers and civilians have been killed in a conflict that could have been prevented. The government has simply stopped reporting the killing of army soldiers, as this may have a huge impact on those who are being sent to the restive English-speaking regions.

The government has continued to put a brave face on a very bad situation. But behind the scenes, there is an atmosphere of regrets. The government knows that fighting a war on multiple fronts is a dangerous thing to do. A source close to the Unity Palace has indicated that the government is slowly admitting that it had underestimated so many things, especially the role the Southern Cameroonian Diaspora that holds that it is time for it to play a key role in the country’s economic and political life.

After more than five decades of unnecessary marginalization, the Southern Cameroonian Diaspora believes that it can right the wrongs of the past by financing the various armed groups that are wreaking havoc in Southern Cameroons. Today, the region has become a no-go area for many people. The country’s administrative officers have become targets for the armed groups. Some government officials have been kidnapped, though none has been killed. But this act by the fighters is sending a very strong message to the government that has been giving the impression that it is in control of its entire territory.

So far, the international community has been turning a blind eye to the death and destruction that army soldiers have been spreading in the two English-speaking regions of the country. What could be the meaning of such silence?

The international community might have called for inclusive dialogue at different stages of the conflict, but its passivity and lack of interest in the whole situation speaks to the connivance between it and the Biya regime to decimate the indigenous people of Southern Cameroons. If the international community does not come out of the “Omerta” it has imposed on itself, Southern Cameroonians will continue to consider it as an accomplice in the genocide that is currently playing out in their country.