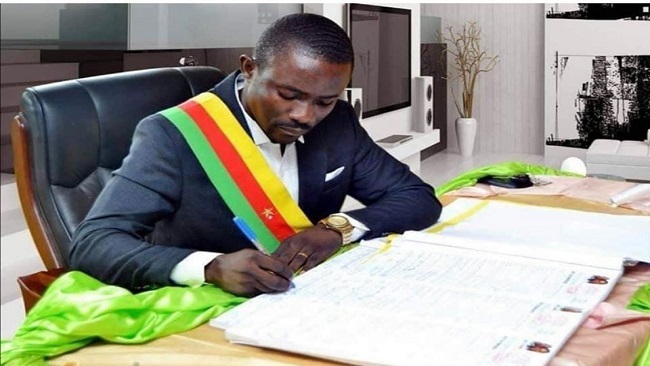 Southern Cameroons Crisis: Why was the Mamfe Mayor killed? 0

Over the last two weeks, the death of Mamfe’s young mayor, Priestley Ashu Ojong, has dominated discussions in many parts of our country. Social media is awash with stories about his killing, but nobody has been able to clearly point out why he was killed and by who.

With such a huge arsenal, Priestly felt that he had the best protection. Dead was for other people and not for him. But he failed to understand that success always comes with huge problems, some of which could be very challenging and may even lead to death. And it was one of such problems that led the young mayor to an early grave. But there are many questions which still linger and one of such questions is: Who killed the Mayor of Mamfe and why?

Of course, when news of his death hit social media, the entire country had only one suspect in mind – Amba boys. The young mayor, who was driven by vaulting ambition and arrogance, was, indeed, in the crosshairs of many armed groups in Manyu because of his blind loyalty to the ruling party, his youthful exuberance and bloated arrogance.

He had made the defeating of Amba boys in Manyu the cornerstone of his political agenda. He had wanted to prove that he could roll back the insurgency in that part of the country. Little did he know that the anger against the government was deep and complicated.

At 35, he could not figure out that many people in the former West Cameroon had been hurt by government policies. He was too young to understand and he had made up his mind that he would never listen to these songs of revolution which, to him, were simply heralding an end to his brilliant political career.

His ambitions were lofty and had blinded his reason. Despite advice given to him by many experienced politicians and elders, he went ahead to implement his reckless and egoistic agenda.

Many politicians in Southern Cameroons, especially those of the CPDM, have been very careful with their rhetoric. They love the free money the CPDM provides, but they also understand that the government lacks the capacity to defend them in the event of any attack.

Caught in this nasty situation, most of them have resorted to run with the hare and hunt with the hounds. They know their options are limited. They must please their masters in Yaoundé, but they must at the same time save their lives and those of their families. As a result, money has been changing hands under the cover of darkness and that is why some CPDM politicians feel save even when in Southern Cameroons.

But the mayor of Mamfe had vowed never to play such a game. He always counted on the military for his protection, failing to understand that having the military on your side is no guarantee of security. There is no military stronger than the people, especially those who operate under the cover of darkness.

Amba boys have been on the young mayor’s trail for a long time. He was a marked man even when he was the deputy mayor. His public pronouncements against the revolution that has made Southern Cameroons ungovernable clearly made him a dead man walking.

Many of the young fighters are brothers of people who have been killed by the military and the only language they understand is revenge. In their view, anybody who is collaborating with the military or the Yaoundé government must be reduced to a mass of flesh. It is difficult to have a discussion with these young fighters who have been empowered by their guns and the money flowing from North America.

Their courage has grown over the years and each time they kill a soldier, they only think victory is on the horizon. In their minds, Southern Cameroons must be free and there is no golden median, and this freedom must only come through bloodshed.

Anybody with a divergent opinion clearly belongs to the world beyond and they have demonstrated this by the numerous people they have killed or threatened. A philosophy also practiced by army soldiers sent to the two English-speaking regions of the country to roll back the insurgency.

In a place like Manyu, many people who have had intercourse with the Yaoundé government are clearly in the storm’s eye. They know death is locking very close to home and many have had to skip town just to know their peace.

Amba boys are turning the heat on many government officials and the killing of the Mamfe mayor has made many of them to know that the long arm of the Amba justice system will surely reach them wherever they are in Manyu. Some of them are looking at the possibility of quitting the towns and villages of Manyu, but others have already left, leaving behind vast properties they had acquired fraudulently.

Mr. Agbor Benson, the former deputy mayor of Mamfe and former Manyu CPDM president has shown Amba boys a clean pair of heels. He could not stand the pressure and it is rumored that he is walking the streets of Buea where he feels a little safe.

Others like Agbor Tabi Muller, a former deputy mayor of Mamfe, have left the country. Cameroon Concord News Group gathered that he left the country screaming and begging for his safety as Amba fighters trailed him. He now lives in the United States, hoping that things will one day calm down for him to return.

The late mayor’s problems were also internal. A source close to the Cameroon Concord News Group has hinted that the young mayor had made many enemies within his own camp and party by being overly ambitious and unnecessarily proactive. There was a lot of infighting in his party and he kept playing both sides against the middle.

By splitting his own team, the young mayor exposed himself to the bullets of an unknown assassin. When he fell out with the town’s drivers and motorcycle riders, Priestly weakened his information network, making it hard for him to get reliable intelligence. His bloated ego stood in the way of things and that cost him his life.

But no one can say for sure that he knows who killed the young mayor. The reasons for his death are many. Though his party issued a statement accusing Amba fighters, it is clear that any investigations must first look inwards.

The ruling CPDM has been quick to indicate that on that fateful day, the young mayor was heading to Eshobi, a village some 8 km from Mamfe, to receive some Amba fighters who had made up their minds to surrender, but a Cameroon Concord News Group source has said that the real reasons for that trip were related to his ambition of becoming a village chief.

According to the source, the young mayor had other plans that were rubbing up many people in Mamfe the wrong way. It is alleged that on that day, he was going to receive the title of “Sesekou” which would have opened the way for him to become the chief of Eshobi, a village some think is not his.

The Cameroon Concord News Group has gathered that Priestly Ojong, the late mayor, was not a native of Eshobi. His mother is a native of the village, but his father is not from Manyu. Our sources added that after a violent falling out of his parents, the mother brought him to Eshobi as a little boy and that is the only village he knows as his.

According to Manyu tradition, you can never be a recognized member of your mother’s family and your mother’s village is not necessarily your village. Priestly was oblivious of that and since he is a member of the ruling party, he felt he could change the order of things. His enemies in the village are also being suspected of being responsible for the ambush that robbed him of his life.  Cameroon Concord News Group cannot at the time independently verify such claims but promises to dig further in order to get to the bottom of things.

The death of the young mayor has left many people in fear and there is a lot of pressure in the town as nobody knows who will be next. For now, nobody has been arrested by the police for the killing of a young mayor, but Amba fighters are planning to carryout mass arrests of those who participated in a government-sponsored demonstration against the killing of the young, boisterous and arrogant mayor.

The days ahead are bleak and only a negotiated settlement can calm down tempers and minds in the two English-speaking regions of the country. Mamfe is only the small tip of a massive iceberg that may drown Cameroon.