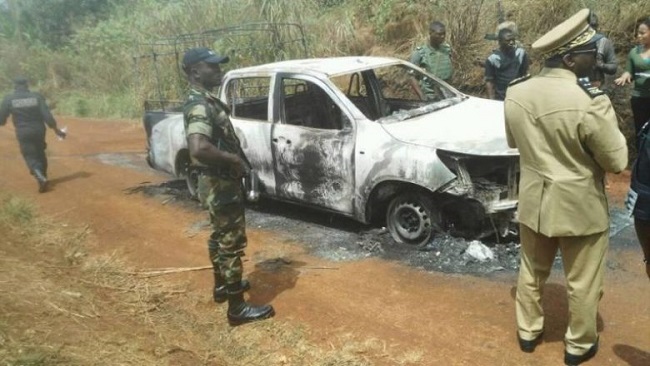 Southern Cameroons War: Victory is not assured for Biya, but trends are also not moving in favor of the IG 0

It has become commonplace in Yaoundé to say that there is no military solution to the conflict in Southern Cameroons. That claim invoked by many Cameroon government officials and Francophone political elites is simply to justify to the international community that the 85 year Paul Biya is interested in dialogue and preventing any international intervention that already seems to be on the way coming.

Any war has a military outcome, and in light of current trends in Southern Cameroons, that outcome could be a regime change in Yaoundé. To be sure, the outlines of the Biya regime’s strategy for winning the war are not in any form visible. What is actually visible is a strategy that hinges on Biya and his ruling CPDM crime syndicate staying in power, the recruitment of army soldiers, the killing of many innocent Southern Cameroonian civilians, the destruction of Southern Cameroons towns and villages while financing Cho Ayaba and CO. to encourage divisions within Ambazonian resistance forces. But an IG victory is possible — and that is what the Biya regime is afraid of.

Cameroon Intelligence Report can now reveal that the Biya regime is fighting the Southern Cameroons war under three strategic principles. The first strategy involves using whatever level of violence it believes is vital to defeat the armed Ambazonian Self-Defense Council Restoration Forces and break the will of its civilian supporters. No wonder, the implementation of this strategy has involved continuous burning of towns and villages and the killing of hundreds of innocent Southern Cameroons civilians in the face of increasing armed opposition in counties such as Manyu, Lebialem, Mezam, Ndian, Koupe Manenguba, Bui and Menchum. This principle accounts for Biya regime’s steady escalation in weapons used and in attacks on the civilian population. In line with its targeting of armed Ambazonian fighters and their civilian supporters alike, the French Cameroun army — after seizing an area formerly under Ambazonian control such as Dadi in Akawaya — kills armed militants and also engages in what are essentially reprisal attacks on area civilians: executions, looting, the burning of homes and businesses. Each village or town taken by the French Cameroun army serves as an example for the next village or town. Kendem, Muyenge, Dadi, Batibo, Nguti, Belo and Kwa Kwa have all been destroyed.

Biya regime’s second principle is to exploit diplomacy to prevent international support for the Interim Government of the people of Southern Cameroons while also avoiding political isolation. With the assistance of its allies, the French government, the Buhari administration in Nigeria and the current Africa Union Commission chair, Moussa Faki Mahamat who once served as Chadian ambassador to Cameroon, the regime has successfully fended off every diplomatic threat from the United States, the United Nations and the European Union including other opponents of the regime. It has played along with various dialogue initiatives as long as they did not impede its military operations in Southern Cameroons. Biya and his Francophone Beti-Ewondo regime are not interested in any form of dialogue that will see them surrender the key to Yaoundé, but rather to paint Southern Cameroonians as terrorists and keep their sympathizers out of the conflict.

The third Biya principle is to keep telling his story. In the Yaoundé regime’s political discourse, its army is fighting a war against “separatists” and the regime remains strong and cohesive. Using all available media, domestic and foreign, to further this narrative, Biya and his gang have increasingly succeeded in advancing perceptions of a growing terrorist threat in Southern Cameroons.

Biya’s goals are to reduce armed Ambazonians to a manageable terrorism problem, eliminate serious political opposition inside Southern Cameroons, and ultimately restore regime control throughout the country.  However, although the regime is not indicating a willingness to settle for less, the Francophone dominated government may be compelled to do so, given the scope of the Interim Government and Biya regime’s own resource limitations. Still, the regime is fighting to maintain at least a hold or influence in all Southern Cameroons counties. In the collective mind of Biya and his Francophone Beti Ewondo members, Cameroon should be one and indivisible — and theirs.

Mindful of whatever overconfidence the Yaoundé regime is presently projecting, certain political and military conditions are necessary for it to triumph. Political conditions include continued diplomatic support from its allies, continued divisions among Southern Cameroonians, and the continued absence of a consensus among African and European nations and allied states on forcefully dealing with the Biya regime.

Military conditions for Biya regime success include making sure that Southern Cameroonians in the Cameroon government army do not see this war from a different perspective and keeping the EU and the US away from the atrocities committed by army soldiers. While there are no guarantees, all these conditions seem unlikely to be met for the foreseeable future.

Biya is facing serious constraints, beginning with the limited size of his troops relative to the geographic scope of the Ambazonian resistance. It has also been extremely had for the Biya forces to pick its battles, fighting aggressively in some places and just holding on in others. A second, related concern has been the loss of regular forces through defection. Regime forces appear to have problems sustaining offensive operations. Even in Muyenge, Kwa Kwa and Otu, government forces failed to fully wrap up operations. There is one small thing, small but great and it is that Biya need to avoid antagonizing the French, whose critical support means the regime must listen to them on the conduct of the war. This was one of the major reasons the regime agreed to the deal to accept that the President of the Federal Republic of Ambazonia, Sisiku Ayuk Tabe was in Yaoundé.

Despite present trends, victory is not certain for Mr. Biya and a number of game changers could halt or reverse the bloody situation on the ground. First, the Ambazonian Self-Defense Council Restoration Forces are now achieving effective coordination between their political and military components, allowing for an integrated approach to the war and development of a Southern Cameroons strategy for fighting it. Second, the Interim Government is also establishing effective command and control that would allow for integration and coordination of forces and their logistics, helping them confront the French Cameroun’s operations. Of vital importance is the fact that the Interim Government could receive enhanced military assistance: weapons, ammunition, training, intelligence, and advice. And above all, some form of direct foreign intervention could reduce the Biya’s advantages and effectiveness. The prospect for each of these options, however, appears dim at the moment. An improvement in the Ambazonian’ capability would thus likely have to emerge largely from the Interim Government’s own political and military resources. And probably the most important achievement for Ambazonians would be unity of effort, which under current circumstances would most likely be under the IG.