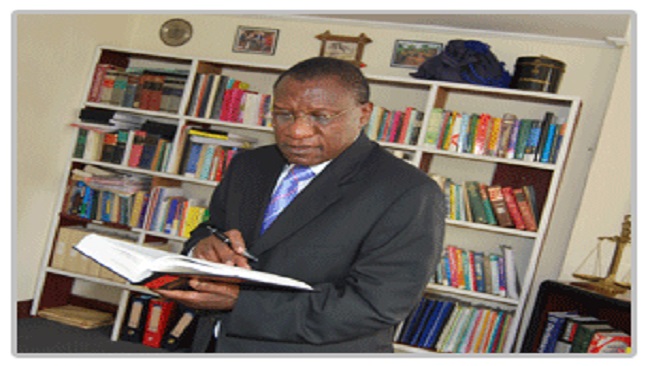 The writing on the wall for the Emperor of SOBA, Prof Ephraim Ngwafor 0

The SOBA America Annual Convention has come and gone; but SOBA, the world over still remains in turmoil and leaderless. This is mainly because Prof. Ephraim Ngwafor who is gradually making himself a cult personality by arrogating absolute power to himself, continues his quest for relevance, even in America, where his protégé Mafany Itoe rolled out the red carpet to the failed President of SOBA. Even presidential candidates in the just ended SOBA America elections were asked to pledge allegiance to the Ngwafor leadership in exchange for votes, while there now exist a Caretaker Committee headed by Dr Namanga Ngongi that is here to stay as the alternative linchpin in SOBA Cameroon.

The Sasse Old Boys Association is the leading ex-students association in Cameroon and the Cameroon Diaspora community. Since Prof Ngwafor became its leader, he has moulded the once famous and highly respected alumni association into his image. An image of disorder in anything he places his hands on, as recorded in his time as the rector of the University in Yaoundé, his unusually short tenure as a minister in La Republique du Cameroun, and now SOBA. His presence at the SOBA America Convention just shows how toxic and divisive he is, with several senior SOBANs who came from all the nooks and crannies of the America and even beyond to avoid being seen around him. His tenure as SOBA President has been so controversial that, SOBA America had to employ the services of armed police officers to protect him in an ex-school event as reported by our Washington Bureau Chief. He likened the permanent armed police presence at the convention venue to a coup being staged by Prof Ephraim Ndeh Ngwafor. The question that the SOBA America presidential hopefuls were not asked was whether they accepted Ngwafor’s new constitution to diminish the powers of the General Assembly, the same Assembly that has given him the platform to rebuild his shattered reputation.

All of the sudden Prof Ephraim Ngwafor after six years at the helm of SOBA is seeking relevance and recognition by attending Conventions and General Assemblies in the Diaspora (Germany and America).

“This is a man who has never called an ordinary General Assembly in his tenure as President of SOBA and when Chapters deferred decision making to their General Assembly as their constitution requires, he frowns at it. This attitude towards the General Assembly, which was always the ultimate decision making body of SOBA is reflected in his total disregard of the body in his recent so called 2018 Constitution’ noted a senior SOBAN who spoke to our correspondent in the America. This has prompted a  “change.org” petition against Prof Ngwafor that has been signed by close to 130 Sobans and counting.

“In his quest to become the Emperor, he has arrogated all the decision making power to himself and the kangaroo committee he now calls the SOBA General Council. Prof Ngwafor has shown so much disdain for SOBANs and their right to govern themselves where ever they are, to the extent of claiming to dissolve a duly elected Executive in the Diaspora” a SOBAN was heard murmuring privately as he left the well attended SOBA America gala night. Prof Ngwafor has banned all the SOBANs who opposed him for life, by rewriting the constitution and using it even before it has been ratified by SOBANs.

We understand that Prof Ephraim Ngwafor who was seeking for allegiance from SOBA America Presidential Candidates can not show anything he has done for SOBA or Sasse College which has now closed its campus for education, except for the chaos that he has left behind in America, UK, Ireland, Germany and Cameroon. His inappropriate donation of significant sums to wealthy SOBA America whilst SOBA in Cameroon has empty coffers with uncompleted projects in Sasse Campus shows his desperate attempt to buy favour from his host.

The Sasse Old Boys Association now looks like the ruling Cameroon Peoples Democratic Movement; CPDM which has no platform through a General Assembly in Cameroon where members can express their views, but instead has a SOBA President who has changed the constitution and removed powers from the General Assembly. The Constitution now allows for ordinary members to bypass their Chapter General Assembly and report to the president’s council in Cameroon directly. SOBANs in the Diaspora are asking, how such a management structure could be possible, as SOBA Diaspora chapters exist in different legal jurisdictions.

Prof Ngwafor has nothing to show for, after 6 years at the head of SOBA. His poor record include inter alia:

Like Shakespeare’s Macbeth, Ngwafor shall sleep no more! SOBANS in the South West and North West in Cameroon no longer recognise him as SOBA President. He has blatantly refused to dialogue with the Caretaker Committee in order to settle their differences in Cameroon and bring all Sobans together.

Can Prof Ngwafor square the circle in the UK?

An overwhelming number of SOBANS in the UK and Ireland do not recognize Ngwafor as the legitimate leader and have been annoyed by his constitutional changes and banning for life of those who oppose him.

In the UK, Ngwafor is supporting a dissident group of SOBANs fighting the main group. Prof Ngwafor has misappropriated the name of the Bishop of Buea in his quest to support the UK dissident group.

So, given all the facts presented against Prof Ephraim Ndeh Ngwafor as SOBA President over the past 6 years, his continuous stay in this role will leave Sasse Old Boys more divided and in turmoil, both in Cameroon and in the Diaspora.