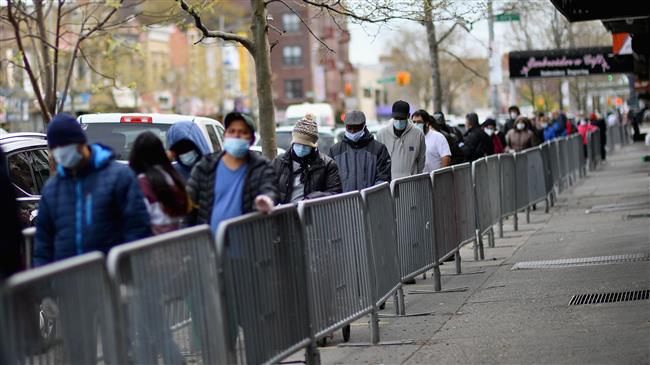 A new study shows that African-American and Hispanic families in the United States have been hit hardest by job losses in the wake of the coronavirus pandemic.

The study conducted by the Pew Research Center and released on Tuesday showed that ethnic minorities in the United States are taking the biggest income hit due to the epidemiological crisis and they are less prepared to withstand the economic blow of it.

Hispanics are the worst-affected, with over 60 percent of them saying they or somebody in their family lost a job or had an income cut, according to the research study.

The figure is nearly 45 percent for African Americans and only 38 percent for white people.

Moreover, the study by the Pew Research Center showed that only 29 percent of Hispanics and 27 percent of African-American adults said they had rainy-day funds to cover their bills for up to three months, compared with 53 percent of white adults.

The Pew report, based on an April survey of 4,917 adults, highlighted racial disparities inside the US, where minorities suffer a disproportionately higher number of COVID-19 fatalities.

The White House has been seeking to deflect criticism of its own sluggish response to the COVID-19 crisis by putting too much emphasis on the virus’s likely origins in China, with US President Donald Trump and other American officials, including Secretary of State Mike Pompeo, referring to the coronavirus as the “Chinese virus.”