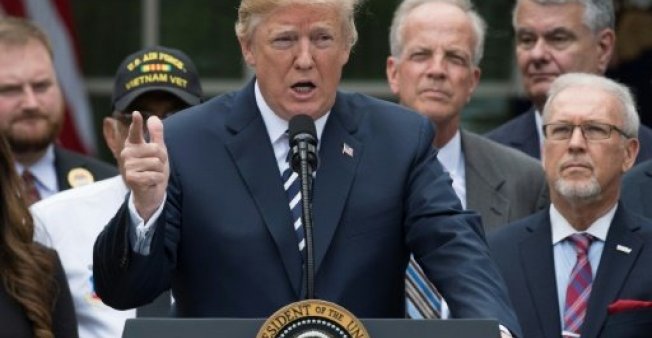 US Republicans challenge Trump on tariffs 0

Several Republican senators defied the White House Wednesday and pressed ahead with legislation that would require Congress to sign off on certain tariffs imposed by US President Donald Trump.

The Trump administration, citing national security concerns, last week unveiled punishing tariffs on imports of steel and aluminum from the European Union, Canada, Japan and Mexico, among others, antagonising free-trade supporters in the US Congress.

The bill, sponsored by six Republicans and four Democrats, would require the president to submit to Congress any proposal to place tariffs on imports in the interest of national security, under Section 232 of the Trade Expansion Act.

“Unfortunately, the administration is abusing the Section 232 authority delegated to the president by Congress,” said Senator Bob Corker, the bill’s chief proponent.

“If the president truly believes invoking Section 232 is necessary to protect the United States from a genuine threat, he should make the case to Congress and to the American people and do the hard work necessary to secure congressional approval,” Corker added.

Corker, who is retiring at the end of the year, said he received a “lengthy” phone call from the Republican president who told him “he’s not pleased with the effort” to rein in his trade authority.

The lawmakers aim to introduce the measure as an amendment to a national defence authorisation bill coming up for debate in the Senate.

The defence bill is must-pass legislation, but the fate of the tariff measure is uncertain.

Even if it passes the Senate, it might end up being scrapped from the final version of the defence bill negotiated with the House.

Senate Majority Leader Mitch McConnell signalled he was unwilling to spend much time on the “contentious” measure, saying he wanted to focus in the coming months on “getting bills passed that we have to do for the country.”

Several Republicans, including House Speaker Paul Ryan, have expressed frustration with Trump’s willingness to defy party orthodoxy and resort to punitive tariffs against allies, moves they warn could spark trade wars that would end up hurting American producers, workers and consumers.

But Ryan hinted Wednesday at the difficulty of Congress reining in Trump’s trade authority.

“You’d have to pass a law that he would want to sign into law,” Ryan told reporters. “You can do the math on that.”

Corker said the “vast majority” of Senate Republicans agreed with the policy to limit Trump’s imposition of tariffs.

But Republican leadership and rank-and-file conservatives have shown little appetite to defy Trump legislatively, especially in a mid-term election year.